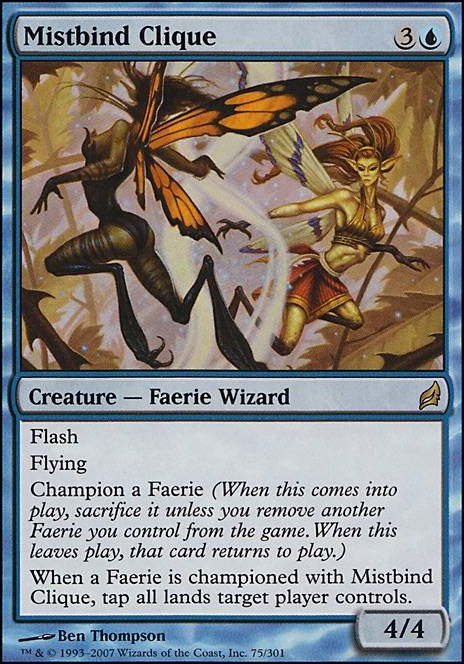 When a Faerie is championed with Mistbind Clique, tap all lands target player controls.

Tribal Faeries - Oona, Queen of the Fae
by Zennargle 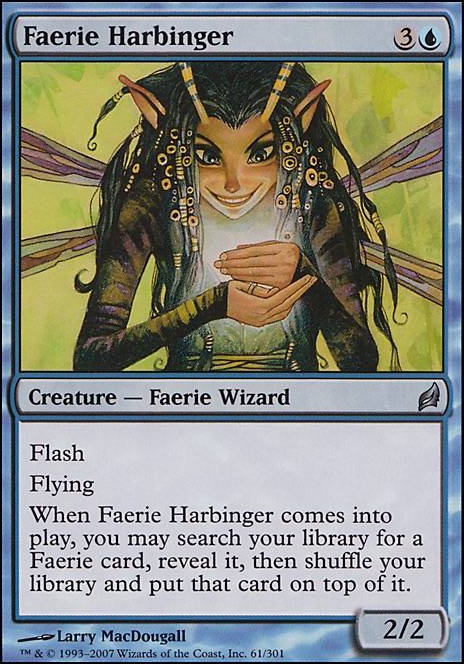 Thanks for the suggestions fluffyeel. Mana Confluence makes a lot more sense in this deck. I'm going to have to give Mistbind Clique and Thalia, Heretic Cathar a try in this.

In a deck like this, one of the first things that comes to mind is Lim-Dul's Vault . It's an instant-speed tutor that helps smooth things out. You can also throw in a few targeted kill spells, since that seems like it could be good (depending on playgroup): I would recommend Vindicate , Anguished Unmaking , and Capsize .

I would avoid City of Brass , since having Urborg, Tomb of Yawgmoth doesn't stop you from damage. Mana Confluence is perhaps less dangerous. If you want more duals, you also can use Sea of Clouds and Morphic Pool .

If you want to annoy people, maybe Mistbind Clique could be fun. Hushbringer means that you would just have instead a big 4/4 with no drawback for 4, but no Hushbringer can really screw with your opponent. (Which is always fun.) And speaking of annoyances, I find Thalia, Heretic Cathar to be much more irritating to opponents than Blind Obedience .

If you're fine with Planeswalkers, there are a few I would recommend! Ashiok, Nightmare Weaver , Teferi, Time Raveler , Elspeth, Sun's Champion , and maybe Kaya, Ghost Assassin all come to mind as potentially useful.

In any event, faeries are lots of fun! Hopefully you make your opponents go "WTF" a lot...

I'm looking to build this out in paper, great deck! With the Brazen Borrower though, I might replace them with Mistbind Clique for a tad more control. What do you think?

In testing out this deck, there are two patterns that came up.

I've found I sometimes get extra hidden strings and distortion strikes that sit dead in my hand, and the faerie miscreants trigger has only occurred once or twice in the 40+ test games I've run.

Some creatures that are good against control and/or combo: Vendilion Clique, Judge's Familiar, Glen Elendra Archmage, Thassa, God of the Sea are just a few examples.