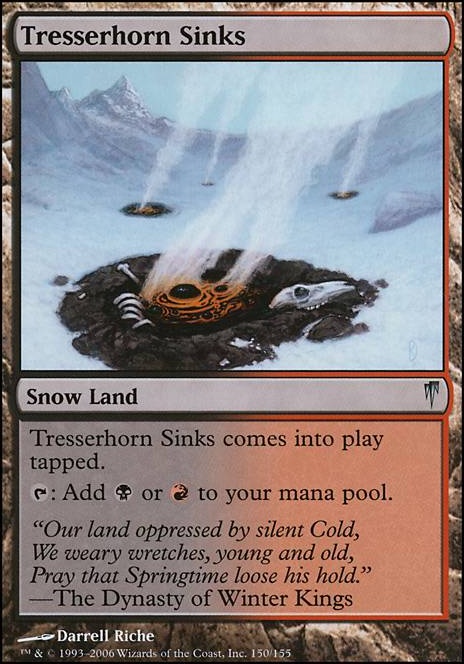 Magical Snow of Legends
by Ear_Wyrm 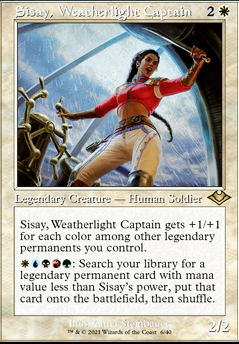 What's the budget for the deck? Because first and foremost, before you start adding tricks n' pranks, I would suggest upgrading your manabase by taking out the tap lands such as Rakdos Guildgate, Akoum Refuge, Tresserhorn Sinks, Bloodfell Caves, and maybe even Temple of Malady for Blood Crypt, Bloodstained Mire, even some basics would probably be better. That said, some fun and funny cards are Magus of the Mirror, Indomitable Creativity, Imp's Mischief, Deflecting Swat (or some version thereof), etc. Good luck with the deck!

Edgar Markov (competitive but not tier 1))

Taking a second look at your manabase, this is not a competitive deck at all. Maybe your nonland cards are good, but you need to fix your manabase. Kabira Crossroads is one of the worst monocolored lands I've ever seen, especially in a format with 40 life and a deck full of lifelink creatures. Memorial to Folly and Tresserhorn Sinks also suck, and Tainted Isle isn't even in the Mardu color identity. If you're going to label a deck as competitive, please make sure it is a competitive deck.

Crop Rotation gives you some instant speed search to find that crucial land you need to complete one of your combos.

Ulvenwald Hydra and Tireless Tracker have some good synergies with lands.

I'd think about adding a couple of cheap fetch-style lands, ie: Evolving Wilds or any of the Panorama cycle instead of lands like Tresserhorn Sinks. They are probably a little better for fixing purposes plus have synergy with Titania and the Excavator. If you're going to stick with tap lands, I'd go with the triple symbol ones that focus on green, ie: Savage Lands [which I'd put in for Sinks], etc.

TheRealPeaches on The Stock Exchange: An ongoing â¦

Want: the following misc cards, set pictured/stated is set desired, nonfoil (yes I know some of these are REALLY cheap, but ordering them online is a pain)

4 Daze from the Duel Deck Anthologies

Since creating this deck I have since sold my paper collection and switched to MTGO. Some of the cards have changed as I am still trying to get back some of them, here are the changes in the format: (card out) for (card in)

InstantsConsume the Meek for Blighted Fen, Countersquall for Retreat to Coralhelm, Fuel for the Cause for Venser's Journal, Muddle the Mixture for Thassa, God of the Sea, Suffocating Blast for Retreat to Hagra, Terminate for Ruinous Path, Undermine for Scour from Existence, Wrecking Ball for Tectonic Edge

SorceriesBarter in Blood for Mogis, God of Slaughter, Life's Finale for Displacement Wave

PlaneswalkersChandra, the Firebrand for Ral Zarek, Liliana of the Veil for Ob Nixilis of the Black Oath, Tamiyo, the Moon Sage for Teferi, Temporal Archmage