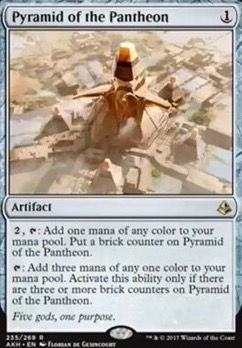 Pyramid of the Pantheon

sumbol:2, : Add one mana of any color to your mana pool. Put a brick counter on Pyramid of the Pantheon.

: Add three mana of any one color to your mana pool. Activate this ability only if there are three or more brick counters on Pyramid of the Pantheon.

Silas and the Value Train
by OdricAllyofZendikar 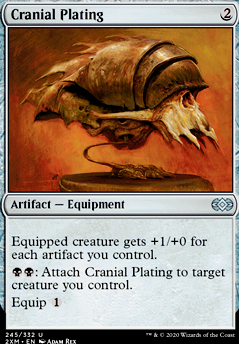 Pyramid of the Pantheon Discussion

I took your advice about Knight of the White Orchid, Weathered Wayfarer and cutting off Pyramid of the Pantheon. I also cut off Alhammarret's Archive, Belbe's Portal and Quicksilver Amulet. I put Eldrazi Conscription and Grafted Exoskeleton instead, to keep my vow not to play Mass Land Destruction :)

I will see how it will turn out and hope it will develop into quite nice deck :)

@ VladMarkov , It's great to see someone building an angel-tribal deck! I once owned one too, also with Avacyn on the lead. While she might not be the best tribal-commander, it surely feels like she does belong in this position lore-wise.

As the deck has a very high CMC due to its angelic nature, I'd probably put in even more ramp-spells, exspecially to be able to ramp early on in the game, as your opponents tend to outvalue your deck with their boardstate, before you're even able to cast your first angel (At least in my own experience...).

Knight of the White Orchid is very useful early on. With you playing mono-white there's surely someone with more lands in play.

Mana Vault is most of the time a one-off, but if it allows you to cast Avacyn at least 3 turns earlier, it's absolutely worth it in my opinion.

Weathered Wayfarer isn't ramp on its own, helps you tutor for cards like Nykthos, Shrine to Nyx though, or any other land you might need.

I'm not quite sure about Pyramid of the Pantheon. I have tried it in my own in a few of my decks, yet I never managed to get it working...

Finally, while I'm thinking in a similar way about Armageddon as you do, I think Worldslayer is a different kind of story, as you literally end the game by attacking with it and Avacyn in play. There's just no way that anyone will be able to recover from a successful attack with this ol' sword.

I hope these suggestions are of some help for you. I'm curious how this list might evolve in the near future.