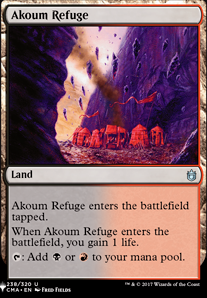 When Akoum Refuge enters the battlefield, you gain 1 life. 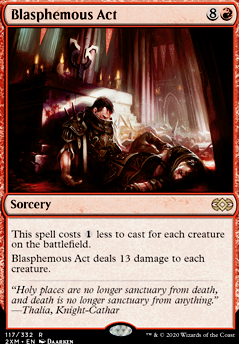 Maybe a few more dual lands like Akoum Refuge , Bloodfell Caves , Dragonskull Summit or Foreboding Ruins ? Besides that, this looks like a mean but fun deck (in a good way). Good job!

Well, the tri-lands EtBT but I can see their versatility and benefit in the following turns, so I can see why you may want to keep them. The cycle from the Ravnica sets if played during the 2nd main phase can ramp in the next turns, so they also have a purpose. I can also see the point of having something like Slippery Karst that you can cycle for drawing.

The lands I would replace are those that do not provide any (significant) trade-off for letting you one turn behind in terms of ramp (e.g. Highland Lake , Stone Quarry , Akoum Refuge , etc.). The first alternatives that come into my mind are shock-lands (e.g. Hallowed Fountain , Steam Vents , etc.) and/or pain-lands (e.g. Adarkar Wastes , Underground River , etc.).

I would also take out Rupture Spire for something like City of Brass or, considering you have a lot of multicoloured creatures in the deck, Guildmages' Forum .

The main drawback of course is that such manabase is more expensive in terms of real-life money.

All Creatures All the Time

I donât think Akoum Refuge is the right card. Kazandu Refuge is probably what you want