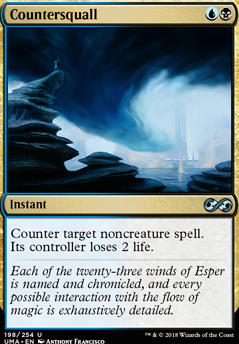 Lower CMC spells that perform the same role will do better, generally speaking. The 2 life loss from Countersquall almost literally doesn't matter in EDH, where you're trying to get rid of ~120 life if you're winning through damage; conversely, Counterspell has the upside of countering anything, Dovin's Veto can't be countered, and Negate has a lower colored requirement to do the same thing.

Regarding the others: They cost less and largely perform the same function. Countering noncreature spells is generally much more important than countering creatures, and the lower the CMC, the more you can do (or protect) in a turn. That being said, if you're aiming for a lower power level or playing in a meta where creatures matter more than noncreature spells, there's merit to the other options.

Countersquall should definitely be swapped for Dovin's Veto, or even Negate. The 3-cmc counters could also be something else: Counterspell, Swan Song, Narset's Reversal, Fierce Guardianship, Dispel, etc.

DemonDragonJ on Top 5 Counterspells Of All â¦

I think that Mana Leak is severely underrated, and I am surprised that no one has yet mentioned it. It is a soft counter, rather than a hard one, but it still is very effective, as it can counter any spell unconditionally and most players will not be able to afford to pay 3 mana until later in the game, and the fact that it costs only 2 mana (and only one of which is colored) means that it can be cast early in the game.

Counterflux is another excellent card, in my mind, because it, itself, cannot be countered, and its overload ability is very nice, as well.

I also think that Countersquall , Undermine , and Thought Collapse deserve to be mentioned, as well; while they may not be the most powerful counterspells in the game, the fact that they add insult to injury with their additional effects should not be overlooked.

Arcane Denial is also an excellent counterspell, as well; while allowing an opponent to draw two cards may be less than ideal, the fact that it can unconditionally counter any spell for a very low and easy cost.

Zombies, they're in my head.

Hardhitta7, Carrion Feeder Seems like a great sac outlet for a lot of the deck. Definitely going to find a slot for it. Also the deck certainly can be made more efficient with better removal and lands etc. I just like the flavor of cards like Go for the Throat and Undermine / Countersquall .

Collective brutality is amazing vs burn. It does a lot on turn 2 in a game where turns matter. It also lets you turn extra lands and cards that aren't very good vs burn into very relevant effects.

Countersquall and Spell Snare and other cheap counterspells are also amazing.

Inquisition of Kozilek is also excellent.

You might not expect it, but one of the best cards in grixis vs burn is Tasigur, the Golden Fang . Getting the game to a place where the burn player is topdecking isn't too hard. Sealing the deal once you're there is essential, and that's where Tasigur shines.

Dovin's Veto or Countersquall are better than Negate.