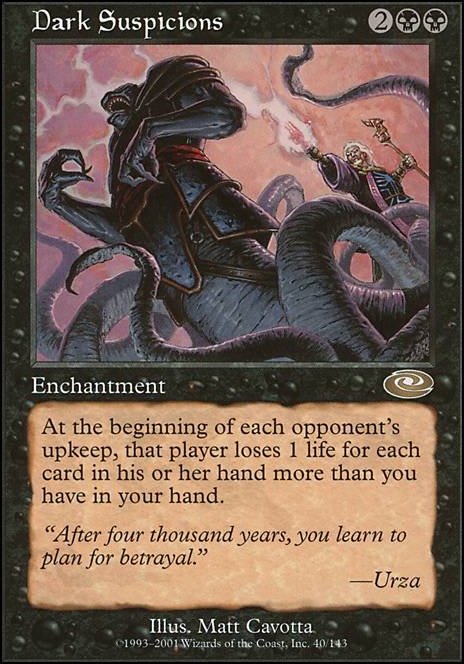 At the beginning of each opponent's upkeep, that player loses 1 life for each card in his or her hand more than you have in your hand.

Thief of Trinkets, Hands, and Hearts
by zolas48

Mogis, God of Slaughter
by BrettRad

Good to see some other Yurlok decks out there. While I recognize we've taken slightly different directions, I just want to remind you that the mana burn effect can kill you too. You have a lot of infinite mana combos and not a lot of options for mana sinks or things to prevent your mana pools from draining.

Maybe consider Horizon Stone, Omnath, Locus of Mana, and/or Leyline Tyrant to help give you some protection from yourself. (Since I saw you reject Helix Pinnacle already) Exsanguinate and Torment of Hailfire could also help by providing game winning mana sinks as well.

Also consider adding some effects that prevent your opponents from casting spells on their off turns, that way when you use Yurlok to flood them with mana on your turn they have fewer options for getting rid of their mana. City of Solitude or Dosan the Falling Leaf.

Lastly, one final strategy my deck employs is a bit of hand punishment for players playing conservatively to avoid the mana burn. Cards like Dark Suspicions or Iron Maiden.

Thant is where the attack is.

so, a couple of suggestion enchantments:

Bulwark & Dark Suspicions: deals damage to each opponent equal to the difference in cards in hand between you and them. pair with Painful Quandary for ultimate pain

Rain of Gore and Tainted Remedy are good substitutes for the "no gain life" effects. because watching Oloro decks kill themselves with their passive is hysterical

Are you feeling it now Mr. Crabs

I agree with Hyperalgialysis. Drop some lands!

Forced Fruition is brutal for your opponents.

Iron Maiden is alright, just happened to come across it today so I thought I'd share. Skullcage is interesting as well, and Dark Suspicions has a similar affect. Sadly these happen at the upkeep which is before the draw step, but they could still do some damage. Mindcrank is a little different but could still fit in well. Gratuitous Violence is perfect for abusing Nekusar's ability.

You probably want Lightning Greaves and Swiftfoot Boots to protect Nekusar if he is to be a main part of your game plan.

Obviously Wheel of Fortune and Wheel of Fate could be great here, but they're not the most budget-friendly. :)

Nekusar is a very interesting commander, and there are many options as far as his decks go. Best of luck!

alright, so I did some more digging - I've been kicking around a similar deck idea for a while. here's some of the stuff you might be interested in:

Citadel of Pain, Copper Tablet, Power Surge (read the errata for this one, it makes more sense, Shadows of the Past, Pyrohemia, Pestilence, Dark Suspicions (or Bulwark, depending. kinda mutually exclusive), Rivalry, Skullcage, Wheel of Torture, Iron Maiden and Circle of Affliction

No creatures for You!

Death Pits of Rath (which couples well with Pyrohemia and Pestilence from earlier), along with Circle of Flame, Heat Stroke, Magmatic Core, Mudslide, Wave of Terror, War's Toll, Storage Matrix, and Noetic Scales.

Pia's Revolution, War's Toll, Bitter Feud (kinda a furnace of wrath - but only for those two against each other), Defense Grid.

probably some stuff in here you considered already, just figured I'd sift through this stuff and see if anything was to your liking