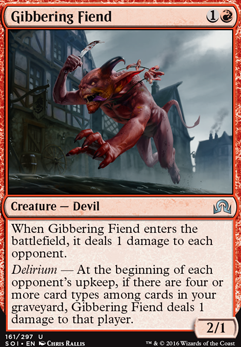 When Gibbering Fiend enters the battlefield, it deals 1 damage to each opponent.

Delirium â At the beginning of each opponent's upkeep, if there are four or more card types among cards in your graveyard, Gibbering Fiend deals 1 damage to that player.

Gibbering Fiend occurrence in decks from the last year

DarkHero on Will there Ever Be a â¦

These are the best comparisons I could find.

Murderous Redcap is a 2/2 for 4, who could be abused, but would need infinite ETB to even be worth it, plus it only triggers off of himself.

Gibbering Fiend is a 2/1 for 2, that only deals 1 damage when it ETB, but to each opponent. Again, would need to be infinite to be relevant, and otherwise isn't good, and only tiggers off of himself

Flayer of the Hatebound is a very similar effect, but it's only on very restricted Graveyard ETB effects.

Now Impact Tremors is a great card, but only because it is triggering off of all of our creatures entering the battlefield or potentially going infinite.

To my knowledge there isn't anything quite like what we are talking about, and it's simply because it becomes that much easier to abuse. Most of the commonly abused ones are giving infinite mana, infinite draw, or infinite tokens, which don't win right away. This is direct, compounding damage. Yes there are other things that can be abused,but this would be a unique level of jank.

Hey its ya boi back at it again with Gibbering Fiend at the helm of Don't play with devils.

To make the best use of lord of riots you'll need stuff that inflicts damage to your opponents.

Enigma Drake rather than the awful Gibbering Fiend