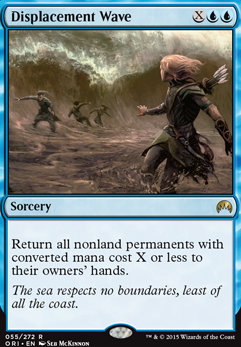 Return all nonland permanents with converted mana cost X or less to their owners' hands.

What Dwells in The Depths
by D_Arthur_Vaderian15

Stay out of the water!
by JhonAF

Love it. Consider Void Snare, AEtherize and Displacement Wave, or maybe some red board wipes like Pyroclasm or Anger of the Gods to slow things down. You could also run Thing in the Ice Â Flip as both a board wipe and alternate win condition, but I would recommend it as a sideboard gag. After game 1, your opponent will pull creature removal, maybe hanging on to bolts for your face. Game 2 you shouldn't have to protect Thing much. Curious how this deck does, as I'm thinking about running this for fun: Bouncy Castle Reverse Rack (Budget). +1.

In my opinion, Tragic Slip, Echoing Truth and Rapid Hybridization are somewhat weak links in your deck. I understand why you put them in, but their interaction is more fancy than useful. Maybe replace those with Repeal, Displacement Wave and Fatal Push?

Well, the main reason this list is so different from most Nekusar lists is that I don't really enjoy the "Ping you to death as fast as possible" playstyle. This deck is meant to be more counterspell/discard/land destruction oriented to slow down and hinder the opponents. I understand that this is probably not the optimal playstyle, but I would at least like to optimize the deck that I enjoy.

Regardless, I usually dislike playing board wipes, but a couple you mentioned and that I can think of I can agree deserve a spot (Toxic Deluge, Vandalblast, Displacement Wave).

The counterspells were meant to be the way to protect Nekusar and prevent boardwipes, but I am not certain.

Thank you, and I'm sorry that your deck got stolen.

Mana Severance does a great job at thinning the deck. Though prob more useful for the Lab Man/Jace combo win.

Displacement Wave is another Retract -type effect for that will return all your cheerios. It can double as removal if you pump more into it as well.