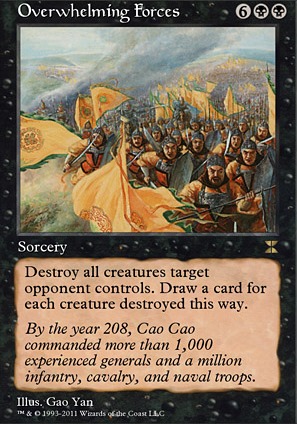 Destroy all creatures target opponent controls. Draw a card for each creature destroyed this way.

Overwhelming Forces occurrence in decks from the last year

Get him a bodybag! Yeeeeeeaahenni!
by grievances

Return to Dust is more expensive but work better than Disenchant in some cases. Any white deck which is not green might want to play Land Tax or Smothering Tithe Some good card draw card which you are missing out on is Phyrexian Arena

Some very good white removals are Path to Exile, Swords to Plowshares and Generous Gift since it can target anything. Vindicate is good aswell but just sorcery speed.

And since you are not playing that many creatures myb include smth like Damnation, Decree of Pain, Plague Wind, Overwhelming Forces, Wrath of God

And that's just me, but i like to throw in a Mana Tithe just to catch some people of gurad, they dont expect a counterspell from a white/black deck.

I was wondering how the site calculates the deck prices and pulls the card prices. They now have a TCG price range, which can sometimes be rather large on a deck. I recently went thru and properly labeled 2 decks Prossh and Olivia BR Vampires with correct set identifies and added condition tags as well, hoping this would better calculate the costs.

The bottom of the range didn't change, only the top dropped down. I knew I had a Overwhelming Forces

that has a $30 price difference between the promo version and the actual card. I have the promo, so I would have expected a larger change to the deck price when I added the set. The card still shows the higher priced version if you hover over the card, despite having proper identifiers, but if you sort the deck by price, it just shows up as unknown, so that is confusing.

If no set is identified, how is the deck being priced, and what are the assumptions for the bottom vs the top of the price ranges? I am trying to decide if it is worth my time to go through and properly identify my cards in my decks, and furthermore, all of the other cards in my collection, that I have setup in extra prototype decks.

Extinction, Forced March, In Garruk's Wake, Kindred Dominance, Overwhelming Forces, Plague Wind, Do or Die is a fun one too!

Season of the Witch is cute vs opposing mana dorks or taxers that dont attack.

Living Death or Living End if youve milled creatures or opponents have a threatening board.