Each opponent sacrifices a creature. If you control a Liliana planeswalker, each opponent also discards a card. 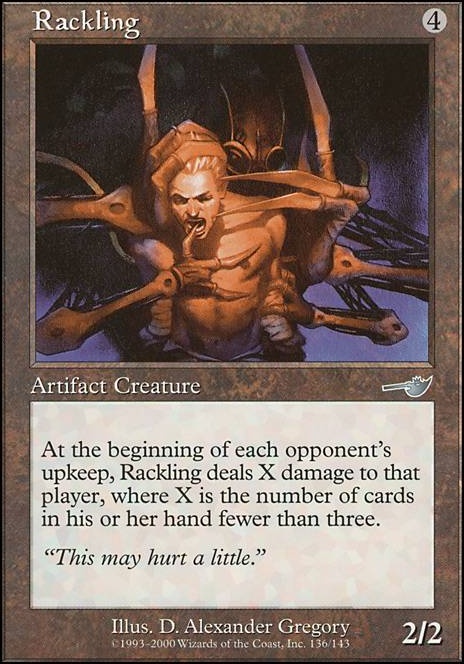 +1 from a fellow 8rack player. If surgical extraction is too much of a financial burden, look into Extirpate I was just made aware of Liliana's Triumph so whenever you do get that Planeswalker, you can try to replace smallpox

@Profet93 Im actually considering cutting Urza's Saga unless I can find space and reason for the inclusion of Library of Leng . Otherwise im thinking that High Market will take it's place.

I'm pretty certain that Xiahou Dun, the One-Eyed is also going to make it into the deck to drive the Grave Pact effects and also provide recursion for discard spells etc. if that happens i'm considering finding a space for Sheoldred, Whispering One for a small loop like effect. the cut i'm considering would be Massacre Wurm

p.s. I will consider the Liliana's Triumph as I am running 3 lili's but im currently in love with the 2cmc split second edict

I get the flexibility you're talking about in terms of Thespian's Stage in comparison. However ill keep that in mind when i comes to play testing when i get the ability to in the future.

Lotus Petal can be chained infinitely with the scrap trawler line thus another back up of infinite mana for Tergrid's Lantern . I don't like Bubbling Muck because of its symmetry as you've also noticed but did proxy in (until i can get my hands on one) the Jet Medallion

Syphon Mind was cut earlier because instead of a use once sorcery regardless of the "value" it accrues, Grim Haruspex is both more explosive in draw power and more easily recurable within the confines of both mono black, and the deck itself.

to note a conversation with some fellows from my play group however there will be a couple adjustments incoming and as follows,

-1 Liliana's Triumph for +1 Grasp of Darkness

the reasoning being, in an attempt to understand or prepare for the hypothetical weakness of the deck (aggro/token strategies) i've determined that adding some spot removal (lack of opponent having a choice) to accompany the sacrificial removal spells (opponent has the choice) as well as an additional boardwipe in case of "oh shit" moments that being said there is also the possibility that Grasp of Darkness may eventually be replaced by Executioner's Capsule due to it being both an artifact and recurable.

- Go for the Throat for + Liliana's Triumph

Why: Profet93 you are correct, much better value

Why: Thespian's Stage would end up tapped at the cost of 2mana compared to Vesuva just coming in tapped for the same ability. Minuscule advantage but it's there

Why: you right Profet93

Why: mindslash isn't as efficient as id like to think it is, puts opponents creatures back in their graveyard (theoretically) and that works against Living Death

Why: Profet93, you clearly point out the why, there is no contention with your logic and rational

Why: Cuts curve, synergy with the trawler line, can easily produce more mana then any other rock in the deck. (potentially infinite???)

Profet93 Metalworker is just a really good way to ramp, acts as a rock for explosiveness. there are 21 total artifacts in the deck, so just above 20% of the deck feeds him, which is also why I included Vault of Whispers unless you think Darksteel Citadel would serve better in this slot

Liliana's Triumph > Cruel edict, although it doesn't matter too much.

Can you explain the purpose of Sanctum of Eternity to me? My understanding is that its to be used with commanders that have ETB effects which can be abused. Is the purpose of this to bring your commander back to your hand if they try to remove her in response to a discard/sac spell?

I JUST noticed you have Necro + Possessed Portal <3