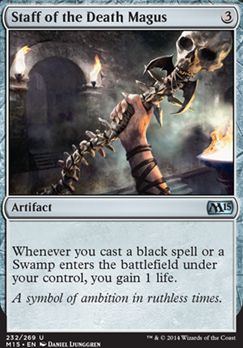 Staff of the Death Magus

Whenever you cast a black spell or a Swamp enters the battlefield under your control, you gain 1 life. 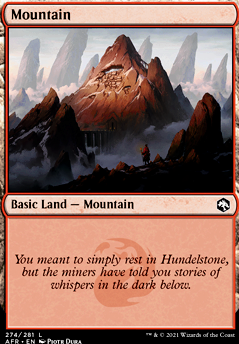 Staff of the Death Magus Discussion

Staff of the Death Magus?

Remove Staff of the Death Magus for Gray Merchant of Asphodel for a powerful devotion play or a Blood Artist for additional pain.

The first obvious fix to this would be to fill out your playset of Ghoulcaller's Chant before you start adding Disentomb s. But ultimately, I don't think you should play too many of those effects, as they are not super consistent in a deck that doesn't self-mill, and they are just dead cards until you even have a creature in the yard.

Now, some changes that could be made to improve the deck overall would be to remove the cards that don't do anything but gain life. Gaining life is one of the weakest mechanics in magic and you need to be given absurdly hight amounts of it before it's worth it on its own. Cards that do other things than gain life, like Gifted Aetherborn can be amazing, but Crypt Incursion and Staff of the Death Magus are pretty awful.

I would also cut some of the clunkier 4-drops to ensure you don't get out-tempoed by faster decks.

Some relatively cheap suggestions to replace them with:

Thanks seshiro_of_the_orochi -- I admit, I forgot about the Well entirely... that should def be in here. Now I'm up to 111! [shakes fist] ;) I don't currently have cards like Throne or Staff of the Death Magus , but will consider once I get down to 100.

DrukenReaps - thanks for the suggestions. I think you're right about the card draw, I'm just concerned about having too few creatures...

I think you're both right about Ring of Xathrid . I've been reluctant to cut because it does double duty protecting & pumping K'rrik. I figure it's better in this case than, say, Swiftfoot Boots .

Anyway, thanks for the help!

Staff of the Death Magus