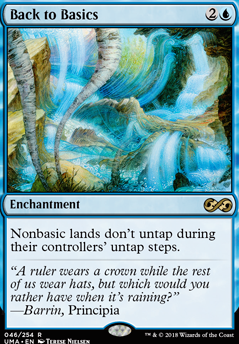 Back to Basics Discussion

Huh, it appears you're correct, Energy Flux's 'bury' effect has been ruled a 'sacrifice' effect, not a 'destroy' effect, so it will hit Kaldra Compleat, good to know! Anyways, I use Energy Flux in Zur, and I generally don't worry about losing my artifacts if Zur is out, it's such a useful effect when it's good that hurting my own deck I feel is okay. YMMV, in my case I have access to Necropotence and Back to Basics to make Energy Flux better. Much obliged for pointing this out to me!

Dreamscape btw doesn't just put lands into hand, it's a Harrow effect, so you put the lands into play untapped. It's one of the weirdest ramp sources in the game in my experience, but finding untapped lands can let you do some crazy stuff. Once you have enough mana to activate Artist, it's actually just 1 mana each time you ramp, for a net total of 3 mana to get your first land out, and you can actually use it repeatedly, each turn you get another use for 1 mana, and if you run Retreat to Coralhelm, you can untap it each time you use it for free, letting you use it until you're either out of Basic lands or are out of mana/cards.

I'm not sure if I'm understanding you correctly on Dance of Many, it doesn't matter if the original version of a copy dies generally, the copy will survive until the card Dance itself or the token copy itself die, or you don't pay UU to keep it around. It's a solid effect if people run creatures you'd want to copy, and the art is pretty neat I think.

The niche use of Retreat I was thinking was that you can untap any creature you can target, be it Zur or another of your creatures like Sun Titan, which could be helpful with Stasis. Without Dreamscape Artist it's probably not worth running.

Probably the last random idea, but Nighthowler can be big in some metas, assuming people run graveyard decks or lots of creatures. You can either Bestow it on Zur for 4 mana, or fetch it out with Zur to make a big vanilla creature, very meta dependent but potentially pretty good.

coolcid78 noted and added. Kept Back to Basics because my mana base is %50 basic and Land Tax is a cheap engine for Azorius.

i would switch Back to Basics for a Sol Ring

If the decks contain enough non-basics that Blood Moon or Back to Basics hoses your mana base, the power level is high enough that interaction should be expected and you should have ways to deal with it.

Have you considered artifact lands including, but not limited to, Drossforge Bridge and Vault of Whispers? These would be a boon for Gadrak and Hellkite Tyrant.

With more than Â¾ of your deck consisting of nonbasic lands you'll need enchantment hate to deal with cards such as Back to Basics and Blood Moon. Dockside Extortionist is good but Enchanter's Bane and cards including, but not limited to Pharika's Libation and Scour from Existence will supplement the go around. I hope this helps.

great list, I also own a Bruvac deck very similar to yours, I'm using petitioners but at this point, I do not own a Thrumming Stone.

More ramp - Sapphire Medallion,Arcane Signet, Mind Stone, your land count is few 33, and only 3 ramp rock, no artifact tutors, I think will be hard sometimes to have 6 mana to cast Maddening Cacophony and kill all the table or recast Bruvac more times.

Protection - You ran 10 counterspells but not Lightning Greaves effects

What is your opinion about Dramatic Reversal + Isochron Scepter combo? it needs rocks to be infinite, but cheaper than Intruder Alarm + Thrumming Stone. I do not run it now, but I was thinking on make some room in the deck for it.

I do run the Grindstone + Painter's combo and I included some artifact tutors FabricateWhir of Invention, also Sphinx's Tutelage, to have other combos to win.

Back to Basics will be a great inclusion in your deck. Since I'm not running Thrumming Stone I have only 23 Petitioners, but I'm planning to remove some cards to reach at least 25, and take advantage of cards like Herald's Horn that I also ran on the deck.