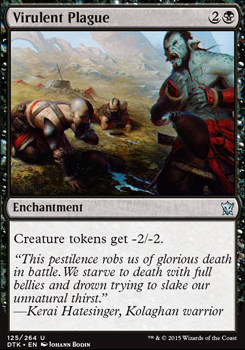 TypicalTimmy on Too many of the same â¦

May I ask, what is your decklist? Running Boros land destruction is not something normally seen. Usually black is thrown in for targeted single removal, or sometimes even green. Wave of Vitriol is an example of mass land destruction in green, and black - while I don't believe has printed MLD, has ways around it.

Nobody ever gets a land for the rest of the game. If you buff your own side, such as with Gaea's Anthem, your side survives while theirs does not. Elesh Norn, Grand Cenobite also works quite well but is a lot harder to get out early game.

Night of Souls' Betrayal, Doomwake Giant, Noxious Ghoul. Any of these could be part of a theme to work around.

Toxrill with Night of Souls' Betrayal and Kaervek, the Spiteful is pretty dope. Add in Fleshbag Marauder and friends, Revel in Riches, maybe even Inexorable Tide and other proliferate effects. You could even include Overseer of the Damned, Quest for the Gravelord and more zombie stuff. And just imagine Skullclamp and Grave Pact/Butcher of Malakir with the activated ability. As I said, I like where this is going.

Night of Souls' Betrayal kills all your opponents creatures and keeps them dead for only 4 mana while not killing your creatures (does put GoA in bolt range, though)

Thank you very much Nyrmak!!! Iâm glad you like where the deck is going. I feel like it is definitely stronger now with these recent additions.

MrNoodlesworth, I forgot to mention that now Dauthi Voidwalker combos with Helm of Obedience along with Leyline of the Void . Now the Helm combo is twice as likely to pull off, and Voidwalker is easier to cast than Leyline.

Iâm also experimenting with Volrath's Stronghold (since I am no longer running Planar Void or Relic of Progenitus and am running more creatures now), as well as the new Profane Tutor (which is slow due to suspend, but when cast during the early turns is very useful for setting up a combo or tutoring for removal). To make room I cut Night of Souls' Betrayal since I am running Tourach, Dread Cantor .

War Room > Castle - While it provides colorless, you take less damage and has a less color intensive activation cost.

Kaervek, the Spiteful - Is he tech against meta token decks or is there another reason I'm not understanding. Also note, Night of Souls' Betrayal can also work depending on your needs. Lastly, while not a serious suggestion, either of the 2 above or Massacure Wurm + Urborg + Kormus Bell = Fun times!

It seems like you need a bit more card draw, I would recommend any of the following.... Read the Bones , Night's Whisper , Sign in Blood , Syphon Mind , and Phyrexian Arena in particular. If you were to add more card draw, even though these are mostly sorcerries, you could help ensure you don't run out of gas. Moreover, it might warrant a Reliquary Tower to go with your Necropotence. Just an idea

Dismember / Defile / Go for the Throat / Hero's Downfall are all good additional kill spells that should definitely be considered.