Whenever a creature with power 1 or less is put into your graveyard from the battlefield, you may return that card to the battlefield under your control at the beginning of the next end step if Shirei, Shizo's Caretaker is still on the battlefield. 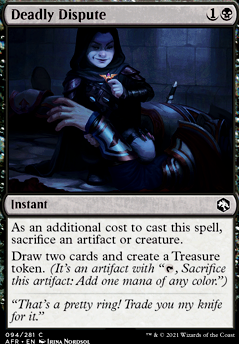 Scoop to Contamination
by SniperFrog

I've recently added Shirei, Shizo's Caretaker, that you SpecimeN87 for that suggestion, so I don't currently see the need for more redundancy as I've also included Animate Dead and Reanimate.

I had Howling Mine and Font of Mythos to ensure my opponents had cards so I could force them to discard. Reconsidered that and have since removed those two.

I like Grim Haruspex myself, I was just concerned with the forced draw it places on me. Being a creature I suppose I could just sacrifice it if I don't need the cards any more. Consideration and testing to be done.

What theme to my Orzhov decks would you be seeing? LoL. I honestly don't know who the "Dream Orzhov Girl" is. Enlighten me.

Shirei, Shizo's Caretaker is a nice suggestion. I'll have to test it out. I did build to hopefully produce enough mana recast my commander should she become a magnet for removal.

I'm not sure about the Dark Prophecy and Words of Waste timing. I'll have to look in to that one.

Thank you for the suggestions. They are appreciated.

So I've noticed a theme to your Orzhov deck names, and I must know, will we ever see the dream Orzhov girl?

Also, half of your 30 creatures could be recycled via Shirei, Shizo's Caretaker for extra value, as well as acting as a lightning rod over your commander.

Also also, with piti-plund and words of waste, geths grimoire is a neat little synergy. If you wanted it to combo, Dark Prophecy or Erebos, Bleak-Hearted would do the trick! Likewise, adding in Waste Not would be immensely helpful. (For the prophecy, if you words of waste before resolving its trigger, you shouldn't lose the life as you no longer draw the card, but i may be wrong.)

I figure nine 1/1 flying bodies for 1 card is pretty good, also the synergy with Alesha, Who Smiles at Death and Shirei, Shizo's Caretaker would give it a lot of play in EDH.

Disciple of the Vault does a better job, on both curve, recursion, not to mention Marionette Master only sees your own side of the board.

Disciple of the Vault sees all artifacts, your's and your opponents. Biggest one that comes to mind being treasure tokens

if I were to include Shirei, Shizo's Caretaker somewhere in the deck(cut Sheoldred, the Whispering One but feels bad) I would then cut Syr Konrad, the Grim for Marionette Master

He Sacc'd Everything But the Budget

I see you have a lot of creatures that reanimate themselves (i.e., Bloodsoaked Champion), and also a ton of creatures that give you value when they die, both for the purpose of sacrificing to Yawgmoth (I assume). It might be nice to add a couple of cards to reanimate the little-er stuff with some amount of repeatability: my favorite is Phyrexian Reclamation, but I bet there are a ton of budget options for that kind of thing. Also, another one that might work is Shirei, Shizo's Caretaker.

In fact, looking over this list, I see a lot of similarities to Shirei lists. If you are interested in seeing some cool mono black aristocrat stuff in a tight budget, you might Shirei, Guiding the Dead " href="/mtg-decks/primer-shirei-guiding-the-dead-primer/">">check out my deck if you have the time: .