Maralen and the fuck your feelings
by Kozelek

Maralen of the Mornsong Ad Nauseum Combo EDH
by EarthBound33

It'll consist your head off

They are guaranteed to be drawn via Ad Nauseam as long as it isn't countered.

Boseiju, Who Shelters All (I'm assuming) is counter protection for Sickening Dreams (kind of pointless, if your opponents aren't countering Ad Nauseam it's already GG.)

Elixir of Immortality can be tutored by Maralen of the Mornsong on turn 6 if your turn 5 Ad Nauseam is countered, and acts as a reset button.

Niko9 on Which recent set release should â¦

I don't have a ton of experience with finance in mtg, so take this with a huge, whopping, grain of salt, but Kami Neon might be a good one because it has a very powerful land cycle (which prices will always stay high) and it's printed at rare, so you have a good chance to get at least some of them.

This all being said, it's generally a crap shoot at the best of times. The people who really make out in investing are the people who don't necessarily do it for a love of the game and who buy large amounts of things at a time. I mean, the number of fetchlands that are sitting in collectors collections, never to be played, must be nuts : )

I definitely crack packs and make decks out of what I have available, and I find that fun. A lot of what I end up using is stuff I wouldn't have really thought about, but looking through things, brewing, and testing, that's so fun to me. But I never view that as a sound financial way to go. I guess I see it as a fun way to spend a little bit on over time, and I get to make a lot of decks that way. It may be smarter to just make one really good deck and trade it over time, but I like having a lot of decks I can break out. The main downside is that none of mine are as good as an optimized deck, because I'm spreading what I've got out.

It's all fun, and it's all how you want to play it. There are plusses and minuses to each approach, but as long as you like what you make, it's all good. It's just, no matter what you do, you can't expect to hit the finance nail on the head. Even when you do get a great pull and that card price skyrockets, if you play it and don't sell it, it's really all about the same. Happens to me all the time : ) Oooh, Maralen of the Mornsong skyrocketed since I bought it, nice, but she's still just sitting in my deck, so...

Have you ever thought about a Maralen of the Mornsong combo? She works with Opposition Agent already, but if you add in stuff like Teferi's Puzzle Box you would have a fairly nasty lock, you access 1 tutored card per turn, while opponents still pay 3 to have to put the card on the bottom right after.

Imp's Mischief is a nice Black card for more competitive decks. Feed the Swarm is a nice option if you really want creature removal, being able to blow up an enchantment can really save your life sometimes.

Nice. Limited always seems like a ton of fun, and I do love how it gives some cards a chance to shine :) I always have trouble finding time with people to get together, but maybe someday we will get some limited in. If it comes up, I may pick your brain about it :) If that's cool.

Anyways, I had a thought about Olivia, and I'm not 100% sure how good it would be. Maralen of the Mornsong combo with Opposition Agent might be strong in this deck because of how much selection you get off of your GY. I think it could be very doable to get op agent into play, maybe on an opponent's end step, and then using Olivia or a reanimate on your turn to hit Maralen. Or if Maralen is in hand, Emergence Zone pretty much ends the game before your turn by casting Maralen, tutoring either op agent or reanimate, and then locking it. The really nice thing about the combo in this deck is that you will have a lot of ways to back it up. If one of your pieces gets countered, both things that you need are creatures, and you can get it back from the graveyard very easily.

I don't know, that's just something I was thinking about. Maralen combo is probably not the most fun way to win, but it's hard to find a place where it actually kinda works. Also, I just like casting Maralen sometimes with no combo. Decks that want to draw a million cards and spin wheels actually hate having to tutor one card. And if someone tutors to remove her, you can always get her back with Olivia. It's a dangerous play for sure, but sometimes the nuttyness can put you ahead.

Hopefully I will try to get a deck together at some point. I tend to be a little hyperactive and get on tangents, but sometimes things come together :) You've given me a lot to think about with Olivia though, so thanks! She's definitely the best, wedding party that I know is evil but I still kind of want to go to it, commander.

Hi MLS91, thank you for your suggestions!

Maralen of the Mornsong does combo well with Opposition Agent. However, by herself she is dangerous because she kills my card advantage with Tinybones (âPlayers canât draw cardsâ) and will grant each opponent a card of their choice before my next turn. So I would never want to play her unless I have Opp Agent in hand already. Plus if both Mary and Opp Agent are in play, Opp Agent can be removed easily, and then Iâm stuck with Mary and her drawbacks.

Varragoth, Bloodsky Sire is ok but is essentially a 5-mana delayed tutor, assuming it survives until the turn after I play it. It is strictly worse than most tutors unless I have Opp Agent in play. So for now, Mary and Vary are staying on the Maybeboard :)

I feel like Maralen of the Mornsong is a really good option for your build. I noticed you were running "Op. Agent" and it makes a lock with her. Varragoth is another option to play alongside Opposition Agent.

Maralen of the Mornsong Why: Locks people into hands with Opposition Agent

Grave Pact Why : Took place of Death Cloud , allows for better interaction with the board as well as just more synergistic with the deck

Read the Bones and Sign in Blood why: best card draw I could find as I can't currently afforded a Necropotence

Hymn to Tourach Why: I've been looking for more instances of discard for the deck

Sedgemoor Witch ----> cut: IDK, i like the card because it makes tokens(think Tavesh/Skullclamp/Smokestack) 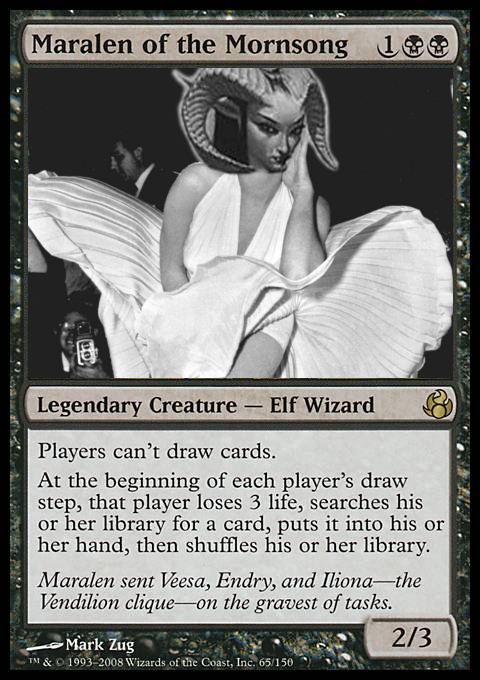 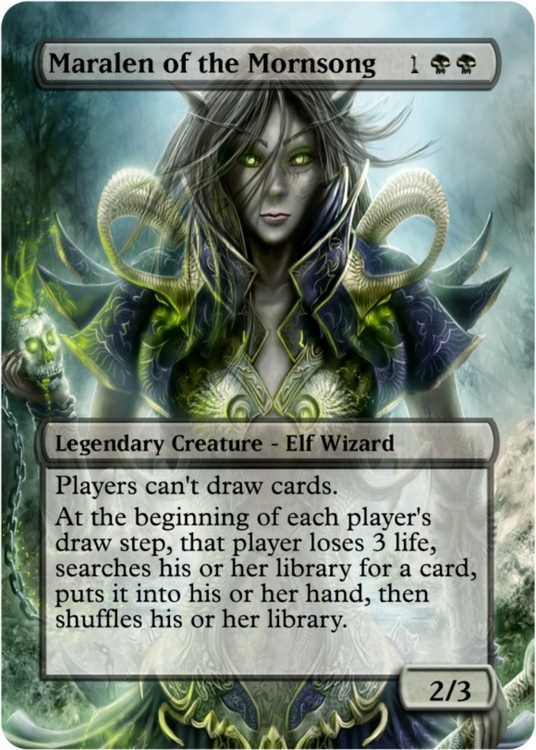 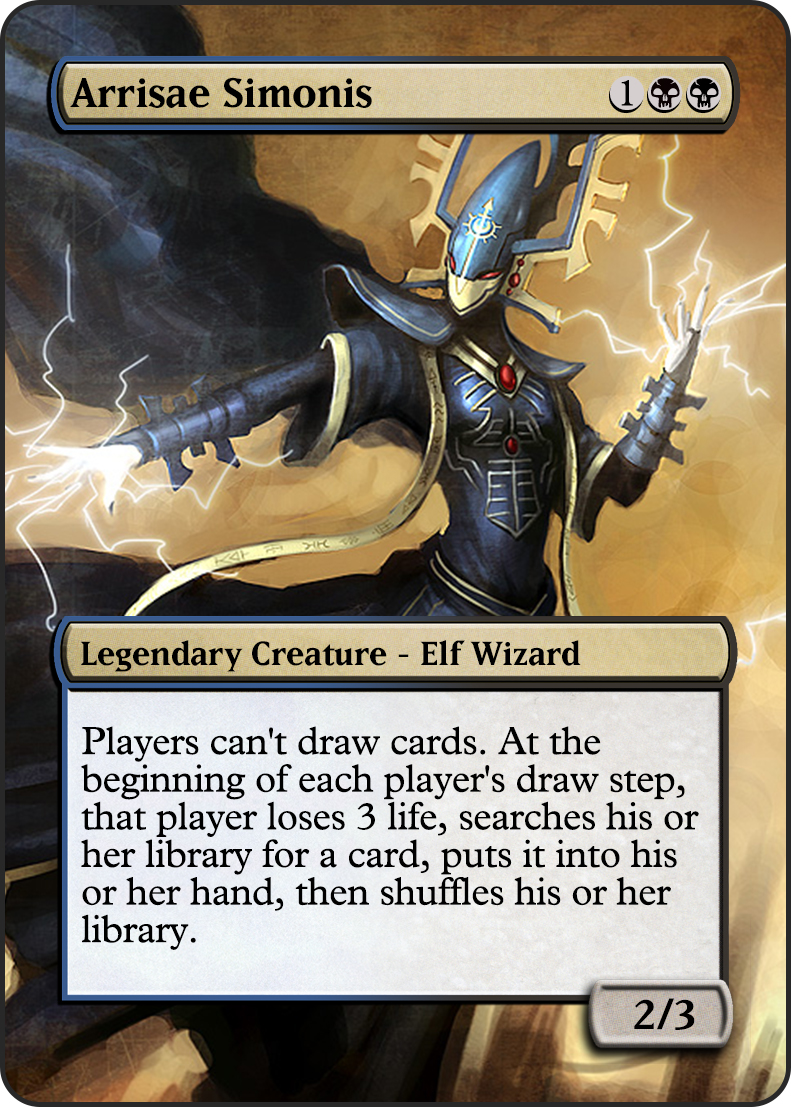