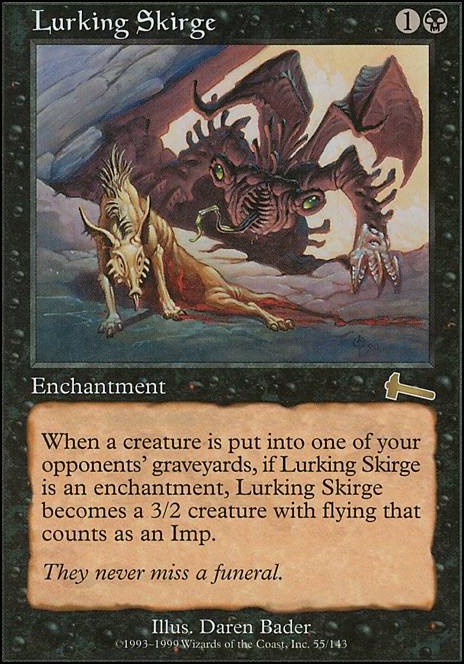 Decent suggestions. I've pruned some of those already, but hadn't considered others.

I don't want to go the Opalescence/Starfield of Nyx route. I'm keeping my wincons away from turning my enchantments into dudes. That's just a personal choice.

I chose Replenish over Open the Vaults because I don't foresee being in a better position than everyone else when I want all my enchantments back if everyone gets all theirs back, plus all of their artifacts.

I've already got the two buff artifacts I want in there, so Spear of Heliod feels, to me, like it's overdoing it. I think I'd rather draw something else in most cases. Similarly, Bitterblossom may be good if acquired early, but I just feel it's too slow for this style of play. Plus those tokens won't be bigger than 1/1s without static pumps, which are something I don't want to run.

We got the new Daxos's Torment, so I will keep that over Lurking Skirge.

I don't think Athreos, God of Passage really works for this playstyle, so he won't make the cut.

I've considered Agent of Erebos, Erebos, God of the Dead, and Heliod, God of the Sun. They may all end up making the cut over things like the liches if I think they will work better.

Endless Horizons scares the ever-living crap out of me, so I'll be avoiding it at all costs. Those plains STAY EXILED if the enchantment leaves the battlefield! AHHHHH!

Imperial Mask... is a card I never heard of. Holy crap. However, is it better than Leyline of Sanctity? Do I desperately need to run either of these? I'm usually playing out my hand when I can, and it seems most other effects that hurt me don't require I'm targeted, so I'm not sure. This needs some thought.

So here's a list of thing I see that COULD work well.

Bitterblossom - Good, cheap CMC, can chump for days or start up an army.

Endless Horizons - Mana fixing for days, "deck thinning", but good and is enchantment.

Imperial Mask - 1.) You have hexproof. 2.) If you play teams, then this becomes even better.

Lurking Skirge - comes in as an enchantment, becomes a 3/2 with flying.

Myth Realized - Cheap, becomes big for free in this deck. Can pay to make bigger if you don't hit the right cards.

The Opal Cycle from Urza Block - Like lurking skirge, these start as enchamntments but become good creatures later on.

Opalescence - because now all your enchantments are creatures.

Open the Vaults - for if everything goes downhill.

Spear of Heliod - for enchantment based, repeated removal (albeit at the loss of life)

Starfield of Nyx - may not fit, but I think enchantment return each turn is good.