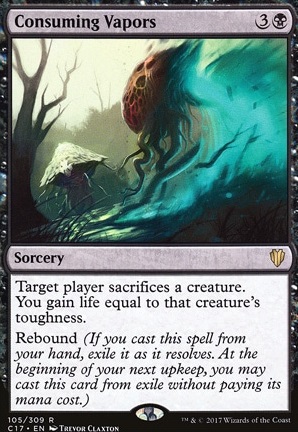 Target player sacrifices a creature. You gain life equal to that creature's toughness.

Consuming Vapors occurrence in decks from the last year

Milling Your Deck Away
by Dave-writer90

How to lose friends and alienate people
by KNEELONDS 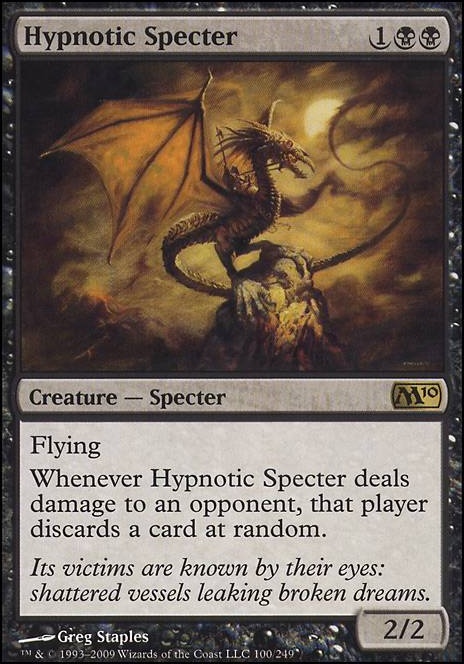 Based Commander Deck
by Sunkporpoise929

king-saproling, thanks for the suggestions! I had Consuming Vapors in the first iteration but decided at 4cmc there was better removal like Kaya's Wrath. Bolas's Citadel would be great!

I can see why you don't want a second Emrakul, but on the other hand, maybe 1 in the sideboard? I know it would make the deck a bit more clunky and have less odds of going off, but if someone exiles him or gets rid of him in a match up by casting: Journey to Nowhere , Day of Judgment , Gatekeeper of Malakir , Consuming Vapors , and Blessed Alliance then you will lose. If you have 1 in the sideboard then you can include him and you might be able to pull out.

I personally feel as if the deck is too dependent on the opponent's strategy to win: it only looks good if the opponent is playing creatures. Most decks that rely on these strategies use internal mechanics to manipulate their opponents' boards (such as Forbidden Orchard and Oath of Druids ). The deck will be amazing against creature decks without shroud but is unfavorable against most other matchups as you would end up with a handful of spells with no targets. Instead of focusing so hard on creature removal I'd add in more versatile cards like Collective Brutality .

You could consider Consuming Vapors , Abyssal Persecutor , and Hunted Horror . Sacrifice decks often go nicely with a dab of suicide.