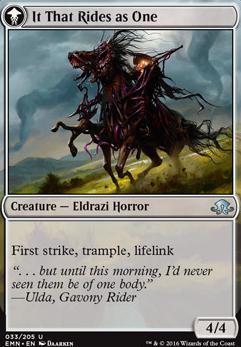 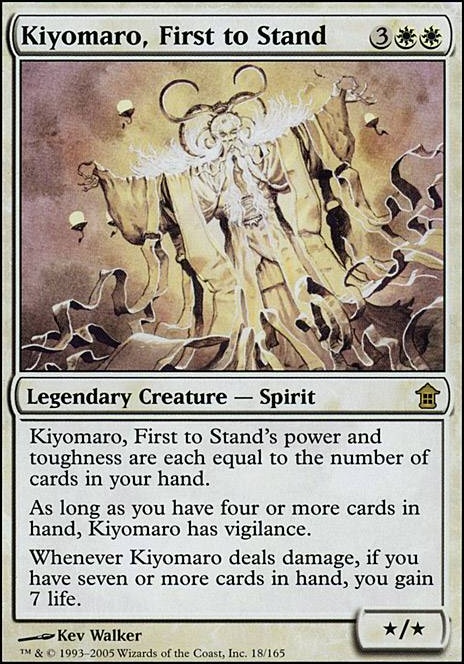 A Queen and her Army
by FeralModern 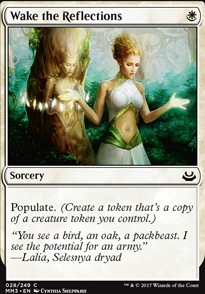 It That Rides as One Discussion

Ajani Strength of the Pride

It seems your Win Condition is all of these +1 life will give your Ajani's Pridemate some real power, so that's a kind of good strategy. Also, it seems your gameplan is to lifelink the crap out of small attacks, and medium attacks with It That Rides as One. I think there are a few cards that could benefit from this. I wouldn't put all of my eggs into one basket, however. How about adding Resplendent Angel if you can manage at least 5 health per turn, you'll be pooping out 4/4 angels with flying and vigilance like it's sparkly angel diarrhea. Possibly use Chaplain's Blessingas a synergy to Resplendent Angel? You can't go wrong with lifegain, and you especially can't go wrong with repeated 4/4 angels! Lots of people think lifegain is useless on its own, but I beg to differ. Heroes' Reunion has won me games!

I'd look at dropping the curve a little myself- your creatures aren't set up excellently against the spot removal that grindy matchups have (not to mention being slow to present threats to walkers), while the top spots rely on creature synergy that you are likely to have less of when you reach them.

While annionted procession/Bishop of Wings/Resplendent Angel is a dope setup, I feel like its pretty disconnected from the lyra etc plan.

I'd either look at ramping into lyra, Shalai and sanctions, or commit to lower cost creatures. Green ramps the best and benifits shalai, while offering shaper's sanctuary, while red offers Chained to the Rocks and a better removal suite to trade better in grindy matchups. Either way, Navigator's Compass is cute as hell here.

Angel of Vitality turns bishop/resplendent into an 'angel and 5 life twice a turn' engine, which is really neat. As part of a more creature focussed list it offers a lot- stuff like Brave the Elements , some It That Rides as One and 1 drop lifegain and you've got something that has a great value engine and crushes aggro strategies.

nobu_the_bard on Anyone knows if lone rider â¦

Lone Rider  Flip is white on the front, colorless on the back.

Flip is colorless on the front, black on the back. Note that Withengar Unbound

has a color indicator that It That Rides as One lacks.

Caerwyn on Anyone knows if lone rider â¦

For future reference, when you have questions regarding rules, cards, or card interactions, you can use the Rules Q&A section of this site. Unlike the regular forums, you have the option to "Mark as Answer" a button to indicate your question has been resolved and you have no more follow-ups. I have taken the liberty of moving your thread--if you could mark an answer once this matter has been resolved, that would be appreciated.

A card's colour is determined by the mana symbols in its mana cost or its colour indicator (a dot next to its card type, such as Ancestral Vision having a Blue colour indicator). This only looks at the card face that is showing. For example, Archangel Avacyn

Flip is mono-White, even though its back face, Avacyn, the Purifier

is Red due to a colour indicator.

Lone Rider  Flip is only a White permanent. As such, it will only receive the +1/+2 effect from Edge of Divinity.

It That Rides as One , on the other hand, lacks a casting cost and a colour indicator--thus it is a colourless creature. As such, once your Lone Rider  Flip transforms into It That Rides as One , it will go from being a White creature receiving the White benefit of Edge of Divinity to being a colourless creature, receiving neither benefit from Edge of Divinity.

Verbatiam, those are all good points, but that's why this is a list of bends, not just breaks. also It That Rides as One  Flip has a colorless identity, but it's essentially a white card (Lone Rider  Flip), and white doesn't usually have access to trample. Normally black cards only get creatures back from the graveyard to the hand, so Shrouded Lore's potential to get back other card types pushes it towards green territory (which it was originally, but, Planar Chaos). Avoid Fate is a precursor to now-normal hexproof instants, but there will be instances in which they don't do the same thing (it doesn't protect against abilites or sorceries, for example). I included Hour of Eternity because it's essentially a reanimation spell in mono-blue, and mono-blue decks typically lack creature recursion - this list is meant to help out decks with color restrictions overcome their intrinsic shortcomings.

I love the list, only thing is I think its a little exagerated and could use a little trimming.

Hour of Eternity is the eternalize mechanic, which was primary in blue, it is similar to multiple other blue effects, such as dredge in how it exiles cards from a graveyard, or clone and it puts a copy of a creature onto the battlefield.

It That Rides as One (once it has been flipped to have that name) is colorless. Colourless who have often had access to all of the keywords it possesses

Shrouded Lore seems like a very black card, its the combination of returning something from the grave and forceing your opponent to "chose" something that benifits you, similar to Torment of Hailfire, Forbidden Ritual, and Tyrant's Choice

Avoid Fate: this card is the progenetor to cards they now print like Hapatra's Mark, Sheltering Word so I'm not sure if this should be considered a break or bend