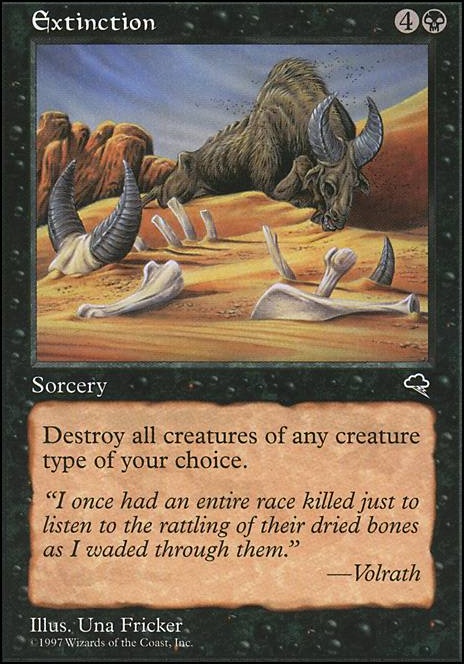 Destroy all creatures of the creature type of your choice.

âItd make them much more powerful...â (SHUDDER) yuck... gross but totally true. THE one upside would be that Extinction would finally hit them. Of course, that also might mean that we would all have to pick a type as well... you know, since weâre planeswalkers too... ;p

Last_Laugh Its even better when Sliver Hivelord is flashed out with Quick Sliver to put an end to all this Extinction nonsense.

A Lapdance Is So Much Better When The Sliver Is Crying!

SynergyBuild on Help beating the s**t out â¦

Cool, play monoblack with 4x Plague Engineer and 4x Engineered Plague and 4x Extinction and even 4x Outbreak , then use some dumb big beatsticks like some demons and cards like Doom Blade .

Want me to make this a decklist? Also do you play a specific format or have a specific budget?

Extinction, Forced March, In Garruk's Wake, Kindred Dominance, Overwhelming Forces, Plague Wind, Do or Die is a fun one too!

I'm looking to create a deck that does three things efficiently:

Budget isn't an issue as I plan on acquiring the pieces overtime, although I wouldn't mind not spending more than I really have to.

My playgroup has a lot of creature theme going on that work very well. I'm aiming to wreck their fun. I'm currently leaning on Olivia Voldaren to build upon but am open to suggestions.

Other cards that helped inspire the concept:

The Caves of Koilos are an important part of the history of Phyrexia, being the location of the portal that brought Yawgmoth to Old Phyrexia in the first place, setting in motion the beginning of the Great Work.

Planar Portal can be expensive to cast and to use, but it can be worth it. If you end up using it, I recommend the Invasion version, due to the flavor text.

Skeletonkey8 has the right idea with Rout. The new art shows Elesh Norn, and the old art shows Phyrexian forces overrunning Benalia, so either version works with your deck's flavor. Life's Finale is another Phyrexian boardwipe. And Damnation is ambiguous enough that it should fit.

I'm sure you're aware, but Dominaria gave us Phyrexian Scriptures and Yawgmoth's Vile Offering.

The Phyrexia's Core/Spine of Ish Sah combo is on-theme. The Core will also give you another way to sacrifice your Wellsprings.

Persecute (Urza's Saga version), Tsabo's Decree, and Extinction can be good, depending on everyone else's decks in your playgroup.

Finally, don't forget that the plane of Rath, the Rathi Stronghold, and the Evincars were all part of the Phyrexian war plan. Guys like Volrath, Crovax, Greven, and Vhati all worked for the Phyrexians, so you can include cards featuring/mentioning all that. Of note are Volrath's Stronghold, Hatred (fun with both infect and a lifelink general), Endless Scream (also fun with infect), Reanimate, Vhati il-Dal (fun with -1/-1 counters), Tortured Existence, and the original printings of Reflecting Pool and Propaganda.

(Wow, this post ended up longer than I originally intended it to be.)