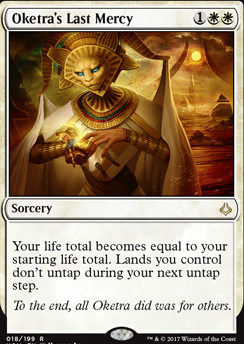 Your life total becomes equal to your starting life total. Lands you control don't untap during your next untap step.

I need to be sectioned for trying this
by Gromitooth 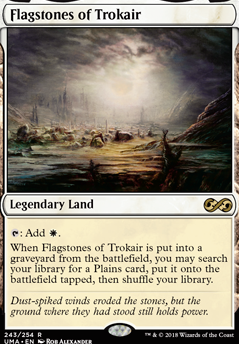 Have you considered False Cure / Tainted Remedy here? It lets you instantly headshot someone when paired with Beacon of Immortality ;) Vito, Thorn of the Dusk Rose is another good card which synergizes with your life gain spells. If you want large chunks of life gain to synergize with Sanguine Bond effects, Oketra's Last Mercy is one of my favorites. If you can afford it, Demonic Tutor is strictly better than Diabolic Tutor -- I usually wouldn't suggest DT on a relative budget, but it's VERY cheap right now due to the Mystic Archive printing ;) Cheaper than Vampiric, even!

Aetherflux Reservoir is another good way to profit off of life gain effects :)

I have a deck that uses a lot of life manipulation - to the point where I often eat my own life down to single digits. Oketra's Last Mercy is a good card in that deck to 'reset' things.

So remember in Amonkhet that cycle of cards which all did something pretty powerful for their cost, but then had the massive downside of almost making you skip a turn:

From what I can tell they are:

In commander losing a turn is pretty bad. I have my own opinion's on each of them, but there is a clear worst in commander (spoiler it's Rhonas's Last Stand)

Anyway, I only have used Bontu's last yell in commander, and it's pretty good early game,and a last resort late game (overall as it goes a pretty good card).

Amyway my question is: Does anyone have their own experience using this cycle and what do you think of them?

You're right. It only targets one creature, so that isn't all that great when I have a ton of cats on the field. I just don't like the idea of spending 3 mana for a +1/+1 and Indestructible for a turn. I'm sure there are better cards than that in the game. I'd prefer something like Aqueous Form that allow me to directly attack my opponent, but I don't know of any green or white cards that do that. If I have a huge Pride Sovereign or Ajani's Pridemate or eternalized Adorned Pouncer, or use Invigorating Surge on Ajani's Pridemate or Monstrous Fleecemane Lion, this method of using a card to attack my opponent directly would really destroy him/her. What do you think of Oketra's Last Mercy??? Seems like a great card to use when low on life instead of using lifegain cards.