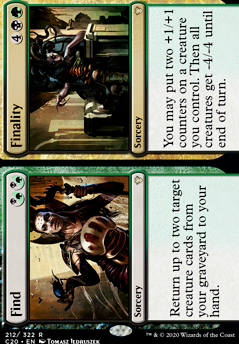 You may put two +1/+1 counters on a creature you control. Then all creatures get -4/-4 until end of turn.

RISE! (A gift for my S/O)
by TreezNutz

Man, well done on this deck! You got all the goodies Reyhan wants.

Although.. It seems a bit shy on the mass removal department. What about Find / Finality and double with an extra recursion slot?

Then I personally would also replace midnight clock for Rishkar, Peema Renegade , as the clock only synergyses with Toothy. I rather use my graveyard then freshen it up also.

Lastly I really like Hadana's Climb Â Flip (backside is nuts) and the somewhat crazy inclusion of Octopus Umbra . Lots of creatures have base power 0 anyway

Another one for me is Poison-Tip Archer. I had a super fun elf-ball deck in standard that absolutely loaded the board with Elves and then I would cast Find / Finality to target one of the Archers and it was usually enough to wipe the board on both sides. Trigger city, especially if I ended up with multiple Archers on the board first.

Sorry, relying on two. I missed Find / Finality but i still feel like another one could helpyou out

More recent and just a fun interaction but I built a Jund Elves deck specifically to include the synergy between Poison-Tip Archer and Find / Finality . Nothing like wiping a board of small creatures and pinging your opponent for each little dead guy.

Prison Realm is pretty flexible and answers the two biggest threats planeswalkers and creatures so you could probably run 4 mainboard without much downside. There isn't much enchantment removal mainboard atm. At least not in any common decks that I can think of other than Doom Foretold decks. Like I said I'd probably drop Assassin's Trophy and go for the extra Prism Realm, Legion's End , Find / Finality , or a Gideon. Then drop two Order of Midnight for a Rankle and Questing Beast at some point. Questing Beast especially tends to get a lot of value from my experience. It can immediately attack, evade, trade, kill a planeswalker, block, etc. Though it will be much stronger once Oko gets banned and Wicked Wolf is on a decline.

The rest kinda depends on your local meta. If mardu knights becomes a consistent problem for you, consider cheap answers like Glass Casket , Sorcerous Spyglass (can stop embercleave, planeswalkers, etc.) in the sideboard. Personally I struggle more with G/X decks (especially G/R aggro) and my sideboard focuses on that since green is so strong atm.