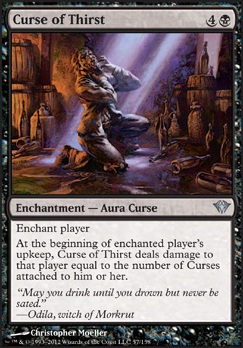 At the beginning of the enchanted player's upkeep, Curse of Thirst deals damage to that player equal to the number of Curses attached to him or her. I have two gigantic, hate-fueled suggestions: Curses and Zo-Zu the Punisher.

Which curses, in particular? I'm glad you asked! Curse of Bloodletting in particular would be monstrous in this deck, Curse of Chaos is a good incentive to throw that one extra creature at the opponent, Curse of Misfortunes speaks for itself, Curse of Opulence makes the opponent a huge target early-on, Curse of the Nightly Hunt can very easily leave the opponent with no creatures left, Curse of Thirst is super jank, which means it would feel beautiful to kill an opponent with it, Curse of Vengeance is a fantastic second wind for you, unless you're playing 1v1, Torment of Scarabs builds slowly but it can also force the opponent to make some really tough choices, and Trespasser's Curse is legendary vs. tokens, tribal, anything creature-based. Also worth noting: Accursed Witch  Flip, though not a curse, turns into a pretty decent one.

Thank you for your time, and for brewing this deliciously diabolical deck.

I'm pretty much just wanting to see if it would be a viable deck for fnm before buying all the cards. I'm in the middle of building a g/w cat tribal deck and still need to get 3 more Metallic Mimic which are pretty expensive all together.

If the deck turns out to not be viable to standard then i will most likely put another post in modern deck help and see what i get there. I have most of the modern curses right now and was actually going to go pick up 2 of the Curse of Thirst for a small casual deck i built to play wity my friends

yoni24, I recognize that Curse of Misfortunes is critical for amassing curses, hence why I already run the full 4. I'm not sure how exactly I'm meant to run more? Curse of Thirst, on the other hand, is definitely the most gimmicky of the curses. The power in a curse deck is undeniable, but I moved away from running a more pure curse list since there isn't a good way to maintain board control. Pretty much any creature is just as good a win condition if the enemy board is permanently neutered by Overwhelming Splendor. More importantly, the deck is already too heavy on 5 drops and I think the engine of Misfortunes + Bitterheart is more important to the current plan. That is to say, I want to hardcast as few curses as possible.

as someone who built one too, you need more Curse of Thirst and Curse of Misfortunes , they are incredibly useful