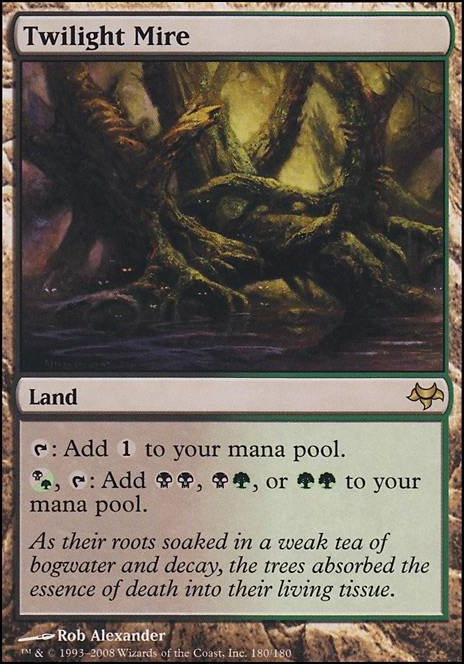 Twilight Mire occurrence in decks from the last year

Seasons Past + Demonic Tutor is a value engine with Tasigur. You already have Demonic which is great. For control, Past can alone fill your hand up with cards and Demonic can keep tutoring for Past. You have some control over what cards you recur with Past which is excellent with a control strategy. Past + Demonic is better with an infinite mana combo, but you don't need this combo to get excellent value from the two cards.

Speaking of infinite mana combos you already have Bloom Tender which is also great and if you enchant it with Freed from the Real this can be infinite mana since then Bloom can tap for at least two colors one of which is blue which can untap Tender with Freed netting you at least one mana each time you tap Tender.

Narset, Parter of Veils , Ashiok, Dream Render , Karn, the Great Creator is the trifecta of powerful opponent disruptive Planeswalkers who are great with control. Ashiok is especially good since it can be a repeatable source of self-mill to feed Tasigur and shutting down your opponents from using most tutors is very controlling in Commander. Flux Channeler with all the noncreature spells can proliferate these Planeswalkers which is worth it.

Nezahal, Primal Tide is a fantastic finisher creature for control with Tasigur especially in multiplayer Commander. Discarding cards to protect Nezahal is good with Tasigur. Jin-Gitaxias, Core Augur is more expensive price, but flash it in surprising your opponents or it's one of the best creatures to reanimate with Animate Dead . Animate can also reanimate an opponent creature which makes it very versatile for two drop reanimation in multiplayer Commander.

Deathrite Shaman is a good control creature in multiplayer Commander. Repeatable exile of your opponents or your own cards for value. Runic Armasaur can give you repeatable draw just by being on the battlefield and it has fat toughness which is good as a blocker. Blood Artist can alone shut down an opponent infinite creature combo. Gives you value when a board wipe happens since Artist triggers when any creature including himself dies. A source of repeatable life gain can be helpful.

The manabase is where you should really look for upgrades. The current manabase isn't for a $500 deck it's for a much lower budget deck. There's some good lands (Tower, Orchard, Coast), but most lands are subpar. Some lands within the budget to consider adding:

Hey, how much are you willing to spend to upgrade your deck? I ask because there's several high price cards you could add to improve game play such as Vampiric Tutor , Verdant Catacombs , Misty Rainforest , Sylvan Library , Survival of the Fittest . There's also some less expensive price cards that could improve game play such as Command Tower , Wooded Foothills , Forbidden Orchard , Twilight Mire , Arcane Signet , Nature's Lore , Arbor Elf .

For lands I'd suggest: Waterlogged Grove , Twilight Mire , Nurturing Peatland , Flooded Grove , Strip Mine and the cards RNR_Gaming recommended, but I wouldn't suggest Foul Orchard though.

Some good lands include Overgrown Tomb , Tainted Wood , and Twilight Mire . And if you got the $$$ Bayou . Other than that I really like the deck.

If you're looking to do spider tribal, perhaps consider Conspiracy and Cover of Darkness ? Conspiracy will let you turn all your creatures into spiders, then you can give them extra evasion with Cover. Also, you may want to add some more dual lands and other useful lands if at all possible. Some examples would be Llanowar Wastes , Hissing Quagmire , Overgrown Tomb , Twilight Mire , and Nurturing Peatland . For tribal synergy, also consider Path of Ancestry as well as, if you can afford the hefty price tag, Cavern of Souls to help protect your spiders.

Another suggestion to capitalize on ETB abilities would be Conjurer's Closet . This lets you flicker a creature at the end of your turns, so you get continuous value! That all said, I like what you have going so far! Hope you have fun with your first deck! :D

Nice Deck, Abzan is one of the best tri colors for tokens, the only problem I can see regards the lands. I would consider adding some of the following lands: Godless Shrine , Temple Garden , Sunpetal Grove , Isolated Chapel , Silent Clearing , Concealed Courtyard , Marsh Flats , Fetid Heath , Caves of Koilos , Nurturing Peatland , Blooming Marsh , Llanowar Wastes , Verdant Catacombs , Twilight Mire , Scattered Groves , Razorverge Thicket , Canopy Vista , Brushland , Windswept Heath , Wooded Bastion , and possibly Prismatic Vista . Having these should help your deck out a lot! If you found any of these suggestions helpful I would appreciate it if you upvote my deck: A Deal With the Devil EDH! Nonetheless, I hope this helps, good luck on your deck, and have a nice day!

Nice Deck, but there is some room for card improvement in it. Start off by adding Hinterland Harbor , and Breeding Pool , since you already have the other check and shock lands. And don't forget Watery Grave either. I would also consider adding fetch lands: Polluted Delta , Verdant Catacombs , and Misty Rainforest . Urborg, Tomb of Yawgmoth is also pretty much a better version of a swamp as well. Filter lands would also be useful like Twilight Mire , Flooded Grove , and Sunken Ruins . You don't really need Bounce Lands like Simic Growth Chamber , but they are ok if you want to keep them. I would prefer to have fast lands though: Blooming Marsh , Botanical Sanctum , and Darkslick Shores . The other Horizon land would also be helpful, I believe it is called Waterlogged Grove . These lands should hopefully make your deck a lot better! If you find any of these suggestions useful I would appreciate it if you upvote my deck: A Deal With the Devil EDH! Have a great day, hope these suggestions help, and good luck on your deck.

The only thing I check in peoples decks (99.99% of the time) are their lands. Lands are my favorite part of magic, so I'm very particular about them. I'd recommend you add the following lands to your deck: Overgrown Tomb , Woodland Cemetery , Nurturing Peatland , Blooming Marsh , Verdant Catacombs , and Twilight Mire . I would also consider adding cards like Giant Growth , because if hypothetically you attacked with Glistener Elf , and played Giant Growth on it your opponent would get 4 infect instead of 1 for only 1 mana more. Otherwise though, nice! Infect is a great ability to build a deck around. If you found any of my suggestions useful I would appreciate it if you upvote my deck: A Deal With the Devil [EDH]. Good Luck on your Deck, and Have a Nice Day