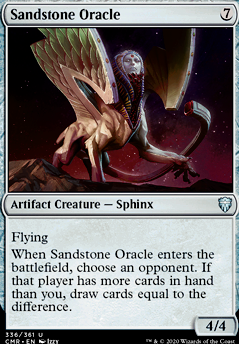 When Sandstone Oracle enters the battlefield, choose an opponent. If that player has more cards in hand than you, draw cards equal to the difference.

Sandstone Oracle occurrence in decks from the last year

One Piece At a Time
by jakeelephant006

You're welcome. I have had good success with Sandstone Oracle and seen good lists for Lesser Masticore, Burnished Hart, and Sorcerer's Broom. I haven't tried the latter three but the Oracle is surprisingly strong, you just ramp hardcore to get the Oracle out and refill your hand and try to kill it in combat to do it again.

harbingerofduh I had Sword of W&P in here once. Card draw > Lifegain.

Driemer84 Memory Jar seems like a good addition. Might pick one up. Mizzium Mortars doesn't seem necessary, I think I'd rather run Hour of Devastation. I guess I live in a meta where Sandstone Oracle is an easy draw 6 most games. Mana Geyser is a great card, and is part of the Wheel/Underworld Breach combo, so I've been looking to add one. Might take out a copy spell. Chandra's Ignition is a so-so card, and it's been debated before. I might replace it sometime, it's not a hill I'd die on, but usually it's pretty good, so it stays.