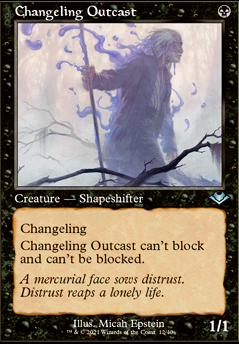 This can't block and can't be blocked.

Be Water
by Deconstructionist

Better In The Dark mk.1
by CryoDex

Grist, All In
by Masonpotato

Balaam__ He's right about the legend rule being a state based action, but you can cast the second Haakon holding priority, and then sac the first one with the spell on the stack. That way you are saccing before the new Haakon comes into play and avoid the legendary rule.

I would also consider Blacklance Paragon as anothe creature to recur with Haakon, it's a fairly efficient altar sac with 3 power and can be used as removal + lifegain against attacking creatures.

I would also play at least 10 ways to discard Haakon when playing 4 copies. A couple collective brutality for example.

Hi BlymBlaster, Changeling Outcast and Gnarled Scarhide for have a creature at turn one?

Thanks for your suggestions, BrassLord! I used several of them. Others I did not use but inspired me to find similar (in my mind) cards to add. (For example, I chose Spell Pierce over Counterspell because of the CMC.) A few suggestions are just too pricey right now, but I added them to the maybeboard for future reference.

What do you think of the deck now? Beyond any general comments you might have, do you think that including Moonblade Shinobi justifies removing some of my supporting creatures ( Ornithopter , Changeling Outcast , Tormented Soul )?

Great build overall. It's hard to think of what you should add or cut but i think your choices need to be cmc based. Your deck is currently sitting at 2.89, but if you can get it below 2.5 you'll be far more consistent. Stuff like Vanquisher's Banner and Coat of Arms are great, but they cost a lot and can bog down your turns. Keeper of Keys is another example of this, and a card I'm honestly a bit disappointed in. I wish it said beginning of combat because an upkeep trigger for monarch isn't very reliable. Knowledge Exploitation isn't really what i would be going for, even if it just costs its prowl cost it's not very exciting. If you really want to tutor for an instant or sorcery you should think of putting in Mystical Tutor , Merchant Scroll , Fabricate , Vampiric Tutor , or Demonic Tutor . You also seem to have a rather high concentration of equipment spells, might suggest removing a couple, maybe Bloodforged Battle-Axe for starters.

As for additions i might suggest some great rocks like Mana Crypt , Thought Vessel , or even Fellwar Stone . You could think of adding Changeling Outcast as a very cheap unblockable rogue. You could think about Drown in the Loch for that flexible removal. Then there's the ability to draw more cards with Bident of Thassa , or Reconnaissance Mission though you'd be flirting with that cmc issue again.

Besides that i can't think of much, and none of my suggestions takes budget into consideration. Seems like it's a very well put together list i don't think i could've put together a better one