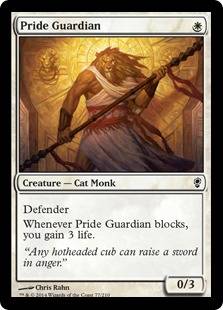 Anafenza, the Foremost
by Servant07

Arcades, Commander of Walls
by wwormell

Ajani's Pridemate could help you add some power to your board.

Radiant Fountain is another lifegain land you could use.

I would also recommend adding some 1-drops to the deck. I know it doesn't seem like much but having something to do on each turn can make your deck much more powerful. For this I would recommend Soul Warden and Soul's Attendant and Ajani's Welcome and Children of Korlis and Genju of the Fields and Goldenglow Moth and Leonin Vanguard and Nip Gwyllion and Pride Guardian and Soulmender .

Well who doesn't like a good theme deck... That being said, Axebane Guardian, might be more useful than Overgrown Battlement. I probably prefer Jaddi Offshoot or Pride Guardian to Wall of Vines too. Doran, the Siege Tower should probably be included just as a deputy to Arcades, the Strategist as should Tree of Redemption as an equally pointless endeavor... Seriously though Sheltering Word seems like an ideal fit...

I disagree with Yosif, Thalia for example is hard to deal with for combo decks. Against aggro decks Path to Exile is great and you can bring in some sideboard cards with lifegain like Kor Firewalker, Pride Guardian, Phyrexian Unlife and Fiendslayer Paladin.