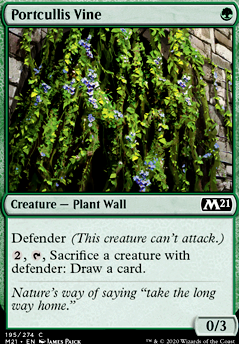 , , Sacrifice a creature with defender: Draw a card.

Uhm actually arcades isn't that broken if you thin
by Hugs_For_Drugs 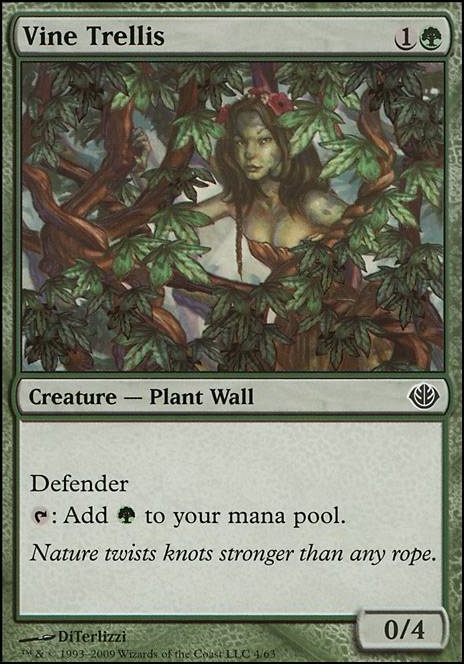 If you want to focus on the high toughness aspect more, I'd recommend moving to a Walls list.

Walls wants to use the things like Huatli, Assault Formation and such to hit hard, but it also employs a High Alert + Axebane Guardian combo. With four creatures with defender in play, you make infinite mana. This shouldn't be your main plan, of course, but it is a very fun include that means that if the game goes long, and with a walls deck, it probably will, you have a big advantage.

You also get Arcades, the Strategist , who lets you draw a TON of cards and is just the best payoff for big butts period.

You also get to run the amazing Tower Defense . If you cast tower defense with a good board and High Alert/Arcades out, you sort of just win on the spot.

Balls to the Walls

Portcullis Vine is ok if your flooding, Saruli Caretaker and Tinder Wall can ramp, Tuktuk Rubblefort gives your walls haste to tap for mana faster, Winding Way and Lead the Stampede are great draw effects in green if your mostly creatures and last but not least Freed from the Real gives you infinite mana if you control a creature that taps for more than 1 blue (Axebane Guardian comes to mind).

I would cut Wall of Tanglecord and some of the burn spells. Walls that just block are really bad vs decks with board clears or non-combat wincons. And more than 1-2 burn spells are unnecessary for your deck to win. If you do add Winding Way or a similar card, consider Valakut Invoker or just big beaters like Boarding Party .

There is a popular pauper deck called "walls combo" that this deck is very similar to. Walls combo can go off turn 3-4 very consistently while also having a lot of defenders. Check it out: https://www.mtggoldfish.com/archetype/pauper-walls-combo#paper

As far as first decks go, this is really solid. Defenders and hydras have a lot of synergy and mono colour keeps the mana simple.

There are a few options to play with- remembering that power gaming with a casual playgroup is usually a mistake. Aim to be fun for everyone.

There are a few infinite combos with mana+untap in defender, but it's usually not too fun.

In general terms, when you onlu have one deck try for card variety with a consistent core -12 to 16 4 ofs that do one thing and make the deck reliable (defender ramp) and some varied payoffs to keep it interesting. I like Mistcutter Hydra for haste, Squall Line to tie games and Uncage the Menagerie to fetch those low cmc hydras or backup ramp.