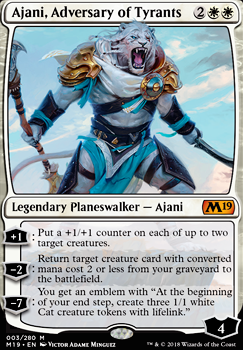 -2: Return target creature card with converted mana cost 2 or less from your graveyard to the battlefield.

-7: You get an emblem with "At the beginning of your end step, create three 1/1 white Cat creature tokens with lifelink."

Arahbo, Roar of the Wild (Selesnya Cat Tribal)
by Skullkid22 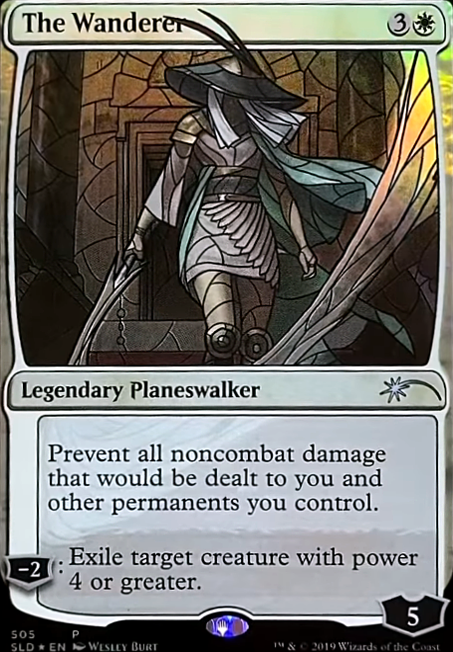 You can put Anthems in your deck if you want!

"If an effect modifies a creature's power and/or toughness without setting them (e.g.: Glorious Anthem), that is not included when determining its base power and toughness."

But your card choices are already great, so not a major loss :-)

One other planeswalker I would maybe suggest for you, is Ajani, Adversary of Tyrants!

Wardens of the Pride

Bravo_Christian this deck is kinda all over the place with what its looking to accomplish. you have 6 drops and are running tapped AND bounce lands that dont really do a whole lot until the following turn. Even those big drops dont win you the game when they do finally get played. I would consider a more succinct plan. Soul sisters do well when their life total gets above 30 and if your plan is to stay above 30 and then ground and pound, i would focus on that.

Martyr of Sands and Serra Ascendant are cheap cards that can help you accomplish that goal. cut your super expensive planeswalkers as they dont help you win right when they hit and are causing a huge burden on your mana base. planeswalkers are fine, i personally love them, but if they arent an immediate threat then your opponent isnt going to care about them and they didnt really do anything anyway.

i would say if youre absolutely hellbent on playing planeswalkers than pick some that are a cheaper and more effective. such as Ajani, Caller of the Pride or Ajani, Strength of the Pride or even Ajani, Adversary of Tyrants and then you can compliment him with a planewalker thats going to pump out creature tokens like Elspeth, Sun's Nemesis. I think your curve should max at out 4 and in order to play your cards effectively youre going to need to run atleast 24 lands. i also think Brimaz, King of Oreskos could help with the gameplan, hes a big body with vigilance and puts more creatures out.

i apologize if this came off as harsh, i just think youll have a more fun, more effective time being able to cast efficient and effective spells during your games. hope this helps a little bit.

Hey there, and kudos! You get an upvote from me. I just put together my own decklist for this command pair, and was here to look for ideas for myself. I haven't put a deck together properly in about two years, so I'm a bit rusty :) and like you, it's pretty theoretical for now. Your list looks quite a bit better than mine overall!

I tend to think Ajani, Adversary of Tyrants is the most efficient planeswalker here. With Lae'zel on the field, he's seven loyalty and four counters for four mana. And in an optimistic case where we actually get to pull off the ultimate, it is POWERFUL.

Also suggesting Damning Verdict, but in a particular way that I understand very well why you wouldn't want to include it. Just in case you hadn't considered it before.

Anyway, for my part I'll be scouring the cards you've included and I haven't and considering what swaps to make for myself here. Kudos again!

Ajani would definitely be a flavor win, but I feel Ajani, Adversary of Tyrants would be a better fit than Ajani, Strength of the Pride. I don't see myself being able to abuse his ultimate since I don't have a lot of lifelink, even with his +1. He's definitely better suited for a dedicated life gain deck.