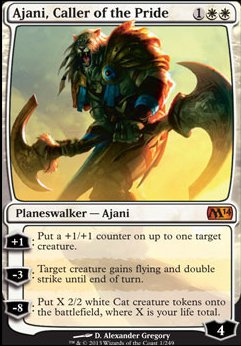 Ajani, Caller of the Pride

+1: Put a +1/+1 counter on up to one target creature.
-3: Target creature gains flying and double strike until end of turn.
-8: Put X 2/2 Cat Creature tokens onto the battlefield, where X is your life total.

Drizzt, Friend to Cats
by Spirits

Ajani, Caller of the Pride Discussion

Ajani, Caller of the Pride could be a fun one-of planeswalker here, you can put counters on your creatures which you can then proliferate and the double strike can get you more counters on stadium with each hit. Proliferating the loyalty counters ain't bad either.

Yeah!, I've played Lost Leonin (in fact I have a foil one back when New Phyrexia was in standar, I loved New Phyrexia) and I used him the firsts months C17 came out. It was very scary, but as you say, it usually tracked very much enemy attention, and got removed long before doing damage or to do the 10+ infect damage. The rest of my Arahbo deck have not infect (not Grafted exoesqueleton, not triumph of the hordes, etc.) so many times lost leonin dealt 5-6 infect damage, got removed and that infect damage became useless.

I really think Lost leonin it's a powerhouse in Arahbo if you modify the deck to play more around infect, double strike and maybe recursion. Also in 1 vr 1 EDH, but in multiplayer is more difficult. In my particular deck that wasn't the case, and combined with the metagame of my playgroup in the moment, I ended cuttin him.

Anyway, maybe in the future Lost leonin gets new tries in my deck, specially if we get more tools to make him shine (Maybe the return of Phyrexians in the future sets give us more phyrexian leonins!)

About Ajani, Caller of the Pride is nice and flavorful, but I prefer Duelist's Heritage wich is bassicaly the same (being honest, Ajani +1 is cute and his Ult is very unlikely to get in EDH, so his real deal is his -3 double strike effect), but Duelist being an enchantment is more durable (can't be attacked by creatures) and can be used as a very useful political tool, as you can offer give double strike to your opponents creatures if they don't attack you, for example. In general, I think this isn't the deck to play any Planeswalkers, as it's very offensive and exposes them very often.

Hello good sir this is such a neat decklist but there's no Lost Leonin nor Ajani, Caller of the Pride . Soo does your playgroup hate Infect or is it kinda spacious since it just gets removed on the turn it gets removed? The possible Turn 3 kill looks promising though (I know the probability is very low to get them on the spot)

Circuitous Route feels like an awkward card to play, if youâre playing it on curve youâre taking your entire turn off, and since youâre most likely to be playing for tempo this does the exact opposite. If you were planning on playing some of the bigger spells for board pumps or card draw, then perhaps the ramp would be more necessary, but at present I donât feel itâs the most important thing for the deck to have access to.

Personally, Iâm not a fan of Ajani, Caller of the Pride. His -3 can be a nice finisher, but his ultimate is too big of a threat for him to be left alone, as well as taking too long to reach in my opinion, and his +1 also feels very weak. I see him as âthree mana, give a creature double strike and flying for a turnâ, which feels far too situational for a go wide strategy. He also is pretty hard to protect, since he offers no protection himself, which as I mentioned before is a pretty big thing for planeswalkers.

Consistent, strong draw power however, is almost universally a good thing for you to have. This lets you go dig for your finishers, your answers, your extra lands if you need them, and generally keep up with more grindy, value based decks. Huatli, Radiant Champion gives you this pretty quickly, her +1 meaning that you can hit the emblem quickly and consistently, plus she has a synergistic finisher stapled to her as well. The massive loyalty boost that her +1 can give also means she can be pretty easy to protect against damage, so it will often take a pretty significant effort to get her out of ultimate range.

I see what youâre saying with cards like Revitalize, but I would say probably try and find cards with a stronger primary effect. Since the draw on these cards only replace themselves in hand, if youâre running them mainly for the card draw then itâs basically a card that is there for deck thinning, but does so very inefficiently. Instead, you could have something like Verdant Rebirth as a cantrip that can also serve as some protection for an important creature, or perhaps Bond of Flourishing, which gives you the ability to pick the best cards from the top of your deck, rather than having it left more to chance. Alternatively, Elemental Bond might be a cheaper draw engine that you can set up, since your lords will make most of your creatures big enough to trigger the ability.

Hope these suggestions are helpful.

I think Prowling Serpopard and Watchers of the Dead are good cards simply because they have their P/T as equal to or more than their Mana cost, making them actually useful cards if I don't need the abilities of them. I'll just keep 1 of each in my deck, as their abilities are still useful if I face a deck with graveyard-heavy or counter-heavy.

Which card would you recommend out of Setessan Training and Cartouche of Strength? I think maybe having 1 of each in my deck would be good? The drawing power is great, but I am on the fence when it comes to fighting another creature with my chosen card, as it might not be that powerful early on in the game, but it does say 'may' so I'm not committed to doing so.

I personally don't like planeswalkers. So I'm not running any in my deck simply because I don't know how to use them, or how to keep them from being killed. If I were to use any planeswalker it would probably be Ajani, Caller of the Pride, as it gives flying and doublestrike, effectively making me able to either block a flying creature, or attack my opponent directly with flying, which doublestrike would allow me to decimate them. On top of that, it's -8 ability is incredibly powerful: X tokens of X life-points! As long as he stays in the game for 4 turns, using his +1 ability, he will allow me to use that ability, which I will ASAP, but if I know that I can attack my opponent directly with flying, I will use that instead.

Also, as a final question, is it really called a 'toolbox' when you prepare for any deck you might face?

I don't mind the long posts! I love that you are such a good player and know the game enough to give me great advice! <3