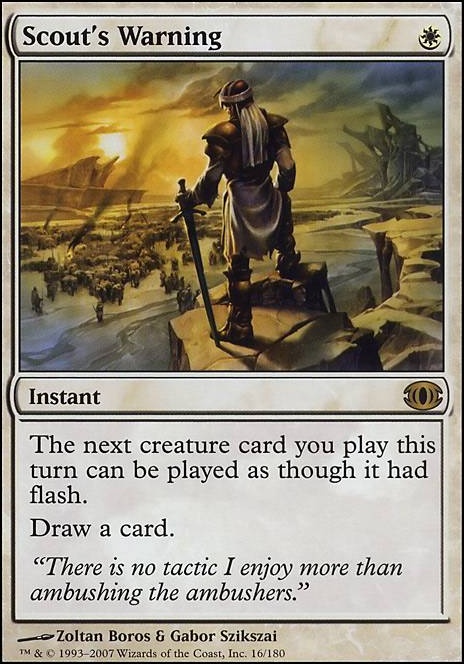 The next creature card you play this turn can be played as though it had flash.

legendofa on Pattern Recognition #195 - A â¦

Can I put in a thought for Scout for the tribe? Are you writing these as you develop in real time, or are you writing in the past?

Either way, Scouts have a similar position to Shamans at this point--lots of representation, little tribal cohesiveness beyond a vague ramp/lands matter idea. They're heavily in , but cards like Scout's Warning and Selvala, Explorer Returned give precedence for . They're working for the good of the community, finding safe places to settle and expand their influence. This fits into the Wild West idea--exploring and taming the frontierlands, or claiming the land through the idea of manifest destiny for a somewhat harsher presence.

Yeah that's fair... I just like the general spirit of your deck...Also maybe Scout's Warning and you can become a psuedo Splinter Twin deck lol. Nevertheless like the brew good luck!

One of Jared's main weaknesses is that you cannot become monarch the turn he enters the battlefield. This means 1-3 opponents get the card advantage from monarch before it does anything for you. That's why I definitively would play Savage Summoning and Scout's Warning. Play Jared at the end step right before your turn. No disadvantage and you gain pseudo haste. Also Savage Summoning protects your spell and pumps Jared for his first attack and Scout's Warning is a cantrip.

The other thing you should be looking for is vigilance, because you want to attack as often as possible (it's a combat centered deck after all), but you also want to block in order to avoid losing the monarch and to pump Jared even further. Heliod, God of the Sun would be a nice addition.

-Drown in the Loch +Miscast

Where can we fit in Jeweled Lotus and Hullbreacher

enpc yeah I had considered Shimmer Myr but I went with orrery because I don't constantly have haste enablers for my commander. I alsojust happened to have a few of them sitting around in a binder collecting dust. I haven't seen Scout's Warning in a LONG time lol. I may consider those in time, after I pick me up a copy of Sword of Fire and Ice (aka my whole next month's budget).

DeinoStinkus always in need of a god cleaning lol

Vedalken Orrery is pretty cool. I personally run Shimmer Myr in my list, but Orrery seems really strong here. As a side note, you can also look at Scout's Warning if you want additional ways to flash in Balan (plus at worst it's a cantrip).