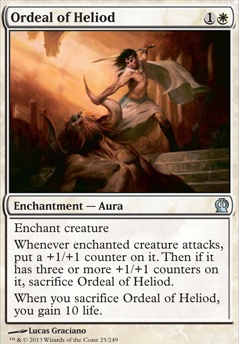 Whenever enchanted creature attacks, put a +1/+1 counter on it. Then if it has three or more +1/+1 counters on it, sacrifice Ordeal of Heliod.

When you sacrifice Ordeal of Heliod, you gain 10 life.

Here To Hurt
by DigiSoda 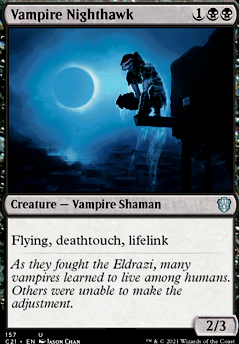 Neotrup on Counters vs. Protection

Once counters are placed on an object, they have no memory of where they came from, and are indistinguishable from other counters of the same type. Granting protection from enchantments won't remove counters added by Ordeal of Heliod , but it will remove the blessing itself.

Hey cool tribe! I'd suggest addding some more auras to help trigger Nyx Herald and Lagonna-Band Trailblazer. Ones that would put +1/+1 counters on your creatures like Forced Adaptation, Ordeal of Heliod, and Ordeal of Nylea might help. Then you might be able to play a couple of Chronicler of Heroes.

Whenever enchanted creature attacks, put a +1/+1 counter on it. Then, if there are three or more +1/+1 counters on it, sacrifice ~.

When you sacrifice ~, untap up to three target lands. Until end of turn, they gain "Whenever this land becomes tapped, it deals 1 damage to any target."

Another ordeal a la Ordeal of Thassa or Ordeal of Heliod