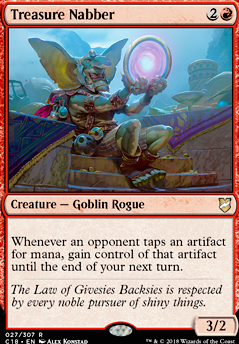 Whenever an opponent taps an artifact for mana, gain control of that artifact until the end of your next turn.

Leeloo, the Blade Reforged
by Jesse2Messy 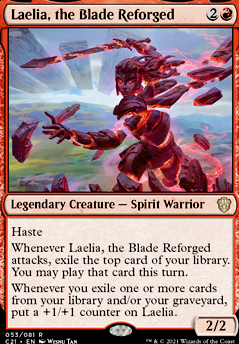 That and Karn, the Great Creator are both known options. I may add one or both of these in the future.

My use of Mycosynth Lattice is to allow me access to all colors of mana, and to allow me more freedom to exchange permanents with Confusion in the Ranks . It also combos with Treasure Nabber and Hellkite Tyrant , so I feel like I am getting a decent amount of use out of the card without Vandalblast or Karn.

Hey, love this deck! Looks very menacing so big thumbs up. Have you thought about adding Treasure Nabber to it? Make it just a bit more stressful for your opponents lol

MagicMarc thank you soo much for the look. Regarding Jace, LabMan, and Ageless your thoughts reflect why I made those cuts, so thank you for the reassurance that I made the right cuts.

Treasure Nabber I think was my getting caught up in this very light Pirate theme doing something piratey. I was actually talking to someone on Facebook about this inclusion and yeah, it's going to be swapped out for Narset.

It was also mentioned, and being considered about swapping in Windfall for Teferi's Puzzle Box . What are your thoughts on that?

Hello, I like the deck and have a couple of comments. I agree that your maybeboard contains some dubious cards except for Narset, Parter of Veils . Here static ability is the only reason you need her. And you should need her. Because she makes all of your wheel effects one-sided. Having one-sided Wheels can win games. I would drop nearly any other card in your deck for Narset considering how many wheels you have.Now about the others:

Nivix Guildmage : This card does not bring much to the deck. It's first ability only interacts with your pirate commander really but is a draw two while you are attacking with the blue pirate. You already have a lot of rummage and wheels going on. It's copy ability matters more for single target or usefully repeatable spells. Almost all of your spells do something big and copying them doesn't do anything better than what those cards already do. Mostly only Abrade and your rummage cards can take advantage of this card. I don't feel that's a good enough reason to include it. But it may be better than some of your other stuff currently in the deck.
Jace, Wielder of Mysteries : This is a win more card that relies on you emptying your library to win. You already have many routes to winning that don't need an empty library to win. The +1 ability is good with your commander and some of your creatures but does that make it good enough to include? Maybe not.
Laboratory Maniac : This is not the right deck for this card. It needs to be built around to be a consistant win condition. When not built around, I would skip it in favor of cards that don't distort your theme. Don't get me wrong, its a good card just might not be a good fit.
Teferi's Ageless Insight : I think this goes in line with the Jace and maniac. If you want to go this route, add all 3 to the deck. Otherwise, to trigger it you are already getting extra draws from another source so don't really need it. And you have to be doing something with another card to trigger it at all so by itself it adds nothing to your game state. Though if you do go with the Jace/Maniac route I would include this for the raw draw and discard power whenever you wheel.

There is a card in the current decklist I was curious about. What does Treasure Nabber bring to this deck? I don't see a sac outlet so I am assuming you just use it primarily to steal big/impactful stuff to use it for a turn? Is that a meta call? It seems a weak add when compared to the rest of the deck. I think this card is awesome and with sac outlets and ways to make mana dorks artifacts can be insane in a game. But I don't feel it merits a slot in this deck. You may have a great reason I overlooked to keep it in the deck and I am interested in understanding the inclusion.