Counter target spell unless its controller pays . Scry 2. (To scry 2, look at the top two cards of your library, then put any number of them on the bottom of your library and the rest on top in any order.)

Oops I Went Infinite
by MrShinju 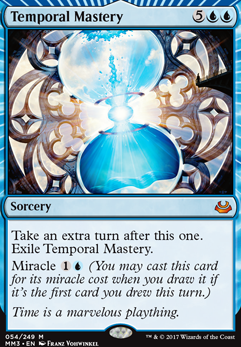 Kicking and Screaming
by Topaz542

I know that I've seen Counterbalance lists in legacy miracles, but the wider CMC variety in modern right now means its likely to fall flat.

You could look for some real value from things like Artificer's Assistant, Treasure Map Â Flip or Marit Lage's Slumber which offer repeated scry. All of them need support, but it'll offer more reliable access to miracle payoffs.

I for one have my hopes for prismari command and would love to see grixis do good things with it (what you said sounds pretty good to me)....the only other countermagic i highly recommend to people that you didnt mention is good ol' Mana Leak ... much like Condescend its super generic/mana base friendly and is an allstar early-mid game.... a newer sweeper that I came across while playing MTGA is Storm's Wrath ... the fact that it catches walkers too seems like it could be pretty good?... never thought of silumgar as an option but honestly that seems pretty legit!

Cruel Ultimatum is definitely too slow for Modern in any competitive environment.... Unless the meta became Naya Zoo for some reason and Grixis control could just do whatever it wanted... I just Run Ultimatum because its Cruel Edict + Three Tragedies + Lava Axe + Raise Dead + Concentrate + Soothing Balm + Exile opponents soul.... It's my favorite card and got the playmat to match ;)

I was just wondering why when I looked into what SERIOUS Grixis control looks like nowadays it hasn't topped any events in so many years... That kinda bugs/concerns me way more that Ultimatum being obsoleted.... unfortunatly it just sounds like + splash whatever other color is just a case of "anything grixis can do I can do better" from the sounds of this thread.... oh well maybe someday Grixis Control will get what it needs to be a presence in the competitive landscape.

Cool deck. You may want to give Reiterate some consideration. Plus I always thought the X counter spells would be very powerful in a controlling Mizzix list. Power Sink, Syncopate, and Condescend etc. Also I LOVE Spell Swindle in this list.

@Omniscience_is_life I think I prefer Repeal over Unsubstantiate as card draw is really important to me in this deck, but I'll keep it in mind! Counterspell is without a doubt better than Condescend or any other counter spell, but it's sadly not legal!

And yeah, I love Select for Inspection, it annoys/slows people, lets you scry, and works great with decks that like it when you're casting spells or have instants on your graveyard. You get a lot of utility for a single cheap spell.