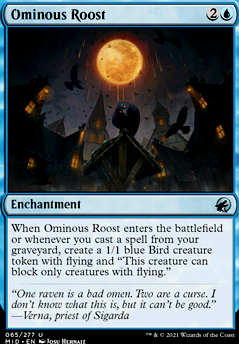 Good idea but not for a budget deck :) I feel like because there is so much Illness in the Ranks doesn't hit and it kills our Lingering Souls tokens its not worth it. We already have The Meathook Massacre as well.

0-2 drop last night, deck kinda crapped out on me. Lost to a Jeskai Murktide pile and to Burn again. Still soft to Burn, though to be fair I have not drawn Kaya's Guile yet in that pairing. Also, Spyro can be awkward on T3 or 4 when I don't want to discard.

Weirdly, I haven't seen a Ragavan in hand in five straight matches. The variance is real. Without that cheap pressure and ramp, it's tough to keep up and hard cast that Batterskull in time, unless I draw more lands than I have been seeing. And last night I never had more than three lands in play. Chalking it up to variance.

Without the win conditions of BW smallpox (Bloodghast, Lingering Souls, various walkers) you should probably add a playset of Shrieking Affliction as those above me have suggested. 4-rack is just not a viable strategy -- and it especially sucks against any low to the ground aggro deck where they dump their hand, all your discard is useless, and you somehow can't draw into a rack effect to race them. IF you're looking for stuff to cut, I'd probably cut the 2 Thoughtseize, since targeted discard becomes very bad in rack decks after turns 1-2. Cutting a nether spirit and an extirpate/wrench mind would give you 4 slots for affliction.

Regarding the manabase -- you do have a lot of lands, but I think you have enough ways to discard them that it isn't too bad. Personally, I don't see why anyone would play a deck primarily built around smallpox without using Flagstones of Trokair, but okay.

You have smallpox but aren't really leveraging it to break symmetry with your opponent. Definitely go 3-4 Lingering Souls since you can discard it to smallpox or lili. Also, you're running BW with 4 urborgs and smallpox yet no Flagstones of Trokair ? I'd add at least 3-4 of those as well. You can probably cut down on some Thoughtseize because having 8x full targeted discard effects isn't really necessary since you should be emptying your opponent's hand pretty fast anyways. Plus they are crappy late draws if your opp only has lands in hand.

Running Lingering Souls (and Raven's Crime ) might have some nonbo with Rest in Peace , so you could use Leyline of the Void or Dauthi Voidwalker instead for grave hate. You could also run Delirium Skeins in the sb against Leyline of Sanctity .