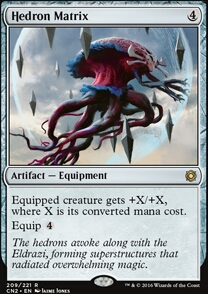 Equipped creature gets +X/+X, where X is its converted mana cost. Kozilek to soothe the colorless soul
by DoomNoodle 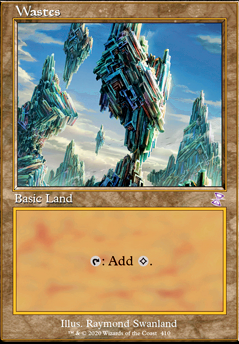 Legacy of the Void
by Galleon_Pendragon 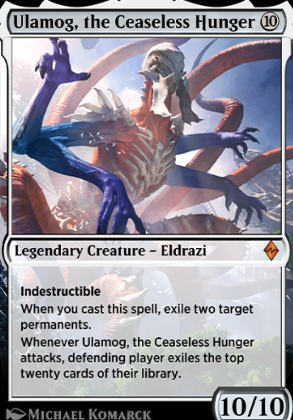 Animar, Soul of Emrakul
by MaskofYalung 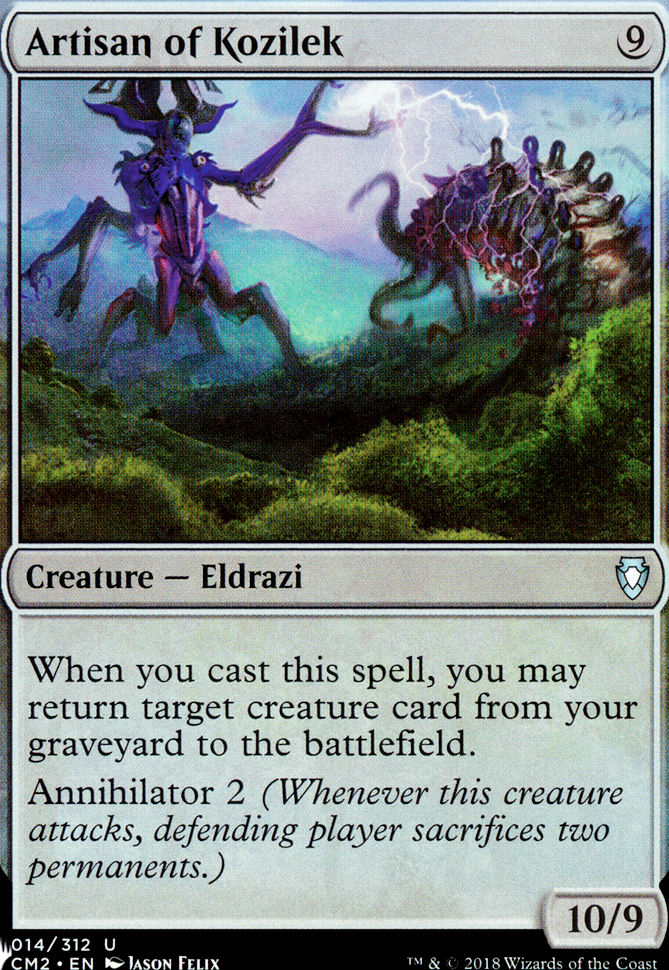 sweet deck!
i have a kozi deck also, so i have a couple thoughts..
if you want to make Kozi a one-hit-kill, you could try some things like Hedron Matrix, Grafted Exoskeleton, Fireshrieker, Eldrazi Conscription

Also, if you want to work on your mana base, i would consider removing:
Evolving Wilds, Terramorphic Expanse. Warped Landscape, Ruins of Oran-Rief, Ash Barrens as these lands either enter tapped or fetch basics. i also opted not to run the urza's lands as it is so unlikely to get all 3. But if you do run them, you could run Expedition Map to help you fetch a useful land.
some nice lands to add could be:
War Room, Bonders' Enclave, Geier Reach Sanitarium, Ghost Quarter, Blinkmoth Nexus, Rishadan Port, Tectonic Edge, Arcane Lighthouse

anyway just my thoughts, hope you enjoy playing with Kozi and have fun!!!

DeinoStinkus - Interestingly, Nahiri creating the hedrons is a retcon--in the first appearance of the Eldrazi, flavor text strongly indicates the Hedrons were unknowable items created by the Eldrazi themselves. This would have been rather in-line with the Lovecraftian stories the Eldrazi are based on--titanic structures that are old beyond measure and beyond mortal understanding due to their cosmic origins.

Not really relevant to this thread as their origin has been redefined to have been Nahiri, but still a fun, interesting fact about how the lore has developed, so I figured I'd share.

Hmm, I am not a big fan of Hedron Matrix, Walker of the Wastes, or the Urza lands.

Your creatures are already huge so the Matrix seems a bit win-more. I feel somewhat the same about Eldrazi Conscription, but the trample and annihilator abilities are nice. The Walker of the Wastes always seems great in theory but comes across as underwhelming in execution (17 Wastes seems low for it as well). The Urza lands are great when assembled, but how often does that really happen?

I'd suggest Helm of the Host instead of Hedron Matrix or some weak card you don't want.

So Iâve been making a list of must haves in 90% of casual commander decks, mana rocks, support artifacts and lands. Iâm not talking situational cards or color specific cards but colorless and lands that you put in almost every commander deck you build regardless if itâs mono or multi color, combo, aggro or control.

Letâs start the list with must have mana rocks

Then you get into optional expensive mana rocks like

And there is one creature that almost makes the cut

And we will wrap it up with lands

So the first 6 mana rocks are auto adds then the second 6 are if you have them/the money to get them, this list does not include signets or talismans. Now I have had people argue Worn Powerstone but I feel it is a lesser form of Hedron Matrix that also didnât make the cut imho.

The first 3 support artifacts are auto adds the second 2 depending on meta and budget.

As for lands they speak for themselves except the last one you might be thinking why? Lightning Greaves / Whispersilk Cloak , Cranial Plating , all the swords.... need I go on? Iâve also had people argue for Isolated Watchtower but as many commander deck run less than 50% basic lands thatâs like 90% of the time will be just scrying 1 and there are better ways to scry 1. I thought about Rogue's Passage but there are combo/control decks that never attack (same reason Maze of Ith is not on the list)

So what are your âauto addsâ when you start a commander deck and why?

Hiya, you commented on my list, so i'm here to give some pointers.

Overall it looks great, the only thing I really have for you is a list of cards that are kind of traps.

most people consider It That Betrays a win-more card, I think it can be fun, but it doesn't have a spot in my lists.

Field of Ruin is terrible in commander if you ask me, boosting 2 other players to get rid of a land isn't something this deck has to do when it can run better strip mine effects.

Lux Cannon is playable so long as you keep in the clocks and Paradox engine, but if you ever look at cutting one of those you should look at Lux cannon first

Hedron Matrix is 4 to cast 4 to equip, so there's generally no reason to run it when you could jam Fireshrieker instead

Thran Temporal Gateway is far and away better than Quicksilver Amulet , it's basically a second copy of Vedalken Orrery

Ugin's Nexus is something I slot in when I feel like playing Emrakul, the Promised End in the command zone, which isn't often, but it's probably fine either way.

I've cut Perilous Vault in favor of Nevinyrral's disk, Oblivion Stone, All is Dust, and Ugin the Spirit Dragon. We can get our stuff back from the graveyard pretty easily, but exiling our mana rocks is pretty rough.

You have a 10 drop priority eldrazi in the command zone, so adding things like Desolation Twin can really muck up your opening hands, I'd look at keeping the in-deck big bois to a minimum.

PS: Don't underestimate the power of Phyrexia's Core and High Market !!! Protecting your eldrazi from getting exiled and having a -land- that can sacrifice Ugin's Nexus is very very good!