Whenever Reality Smasher becomes the target of a spell an opponent controls, counter that spell unless its controller discards a card.

I would add Reality Smasher

Your only way to cast Thought-Knot Seer and Reality Smasher is Blight Herder right now, which means you're casting 4 and 5 drops on turn 7 at the earliest. I'd add in some lands that create colorless mana. The first ones that stand out looking at it are Corrupted Crossroads and Unclaimed Territory, but you'll need to look through other options.
Your curve also doesn't really start till 3, so I'd add in more 1 and 2 mana spells. Probably removal and discard, look at things like Heartless Act and Thoughtseize. You might also consider Hedron Crawler, which both ramps and provides the colorless mana, but its a weak card in general and might not be good enough.
I'm confused by the Unsummon, Necromentia, Unmoored Ego, and the Ashiok. Your deck generally wants to play a creature on each turn from 3 to 6 so you can kill creatures and then win the game. If you're spending mana casting cards to tear apart your opponent's deck, you're not winning the game. If you want more ways to exile cards, try something like Soul-Guide Lantern or Cling to Dust to help fill out your curve and give you some more utility. You can run the big exile cards in the sideboard for combo matchups. I like the deck.

BodhiQL on What's the Worst Trade You â¦

It was the Shadows of Innistrad prerelease. Chronologically, this was right after Eldrazi Winter in Modern, so Eye of Ugin had just been banned. My prerelease promo was Sin Prodder and I had won a game or two purely off the card advantage it gave me and the damage, and I thought it was going to be really strong. At the time, the prerelease promo was 100 bucks, so I was psyched! After the event, I was doing some trading, and this one guy had a second prerelease Sin Prodder. I wanted it really bad, and so I traded my 4 copies of Reality Smashers and Thought-Knot Seers for it because I didnât think they would retain value after the ban. Little did I know, Eldrazi Tron would still be good in Modern even 3 or 4 years later, and Sin Prodder is bulk. 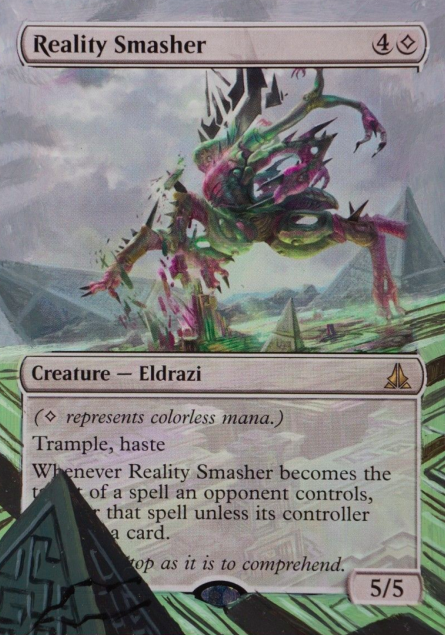