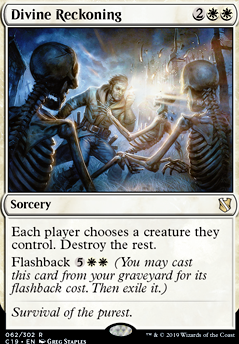 Each player chooses a creature they control. Destroy the rest.

My particular meta isn't too artifact/enchantment heavy, but Krosan Grip is still a great card!

Personally I'll keep Divine Reckoning over Hour of Revelation for now, I'm still testing. But I play in big groups and a three mana "screw you" is definitely a thing! Unfortunately it hits my permanents as well, so that puts it as a maybe for me.

Rites of Flourishing and Font of Mythos are great, and I can definitely see using the Font over Temple Bell . If there's one thing this deck loves, it's redundancy!

Seize the Day, Open the Armory and Jeska's Will

I highly recommend Heavenly Blademaster for any Ardenn deck, as she can allow for a quick overrun strat in the event your Kobold pal is removed. Golem-Skin Gauntlets also give a cheap and incredibly efficient boost. Single Combat is like Divine Reckoning but with the added benefit that your opponents are hosed and open to your attacks for a full turn (outside of the single creature they can keep).

have you considered Divine Reckoning over Wrath of God?