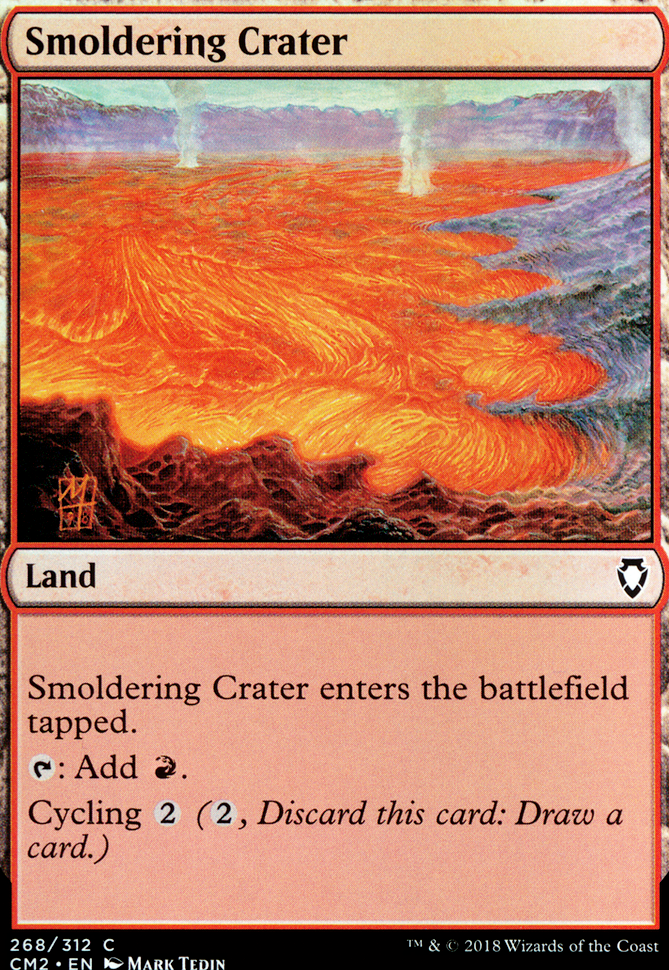 Smoldering Crater occurrence in decks from the last year

Gimli, Lord of the Glittering Caves
by WUBRG87

I did get to try it out, but not as much as I'd like. Busy, busy, busy... The few games I have had have been hit or miss. While people don't expect the punishment neheb can deal out, once they know, you (and him) become targets. I've been able to crush the table a few times, make a draw here and there, and lost a few. I've also changed quite a few things from other neheb player's suggestions.

Stuffy Doll to hate a specific player, Combustible Gearhulk big guy with draw or damage, Fire Servant more ouch, Thermo-Alchemist Not sure what to think yet, seems decent, Insult quick doubling damage and some prevention prevention, Magebane Armor makes neheb a bigger tank and avoids your own hate-everything spells, Doubling Cube redonk. I had 100+ mana with it out, Caged Sun eh, chopping block. Kinda helpful but also expensive. Flamekin Village and Hanweir Battlements haste in a pinch, since I can't afford the crazy haste land from kamigawa, Smoldering Crater and some other cyclers for helpful draws later on in the game.

I ended up not using godo or the other card, since I came to the same conclusions you did with them. I also dropped aggravated assault after I hit a table with infinite neheb turns and felt yucky afterwards, haha. All in all, it's been very fun, and I'm still eager for lots more testing when the time of year where everyone isn't busy rolls around again. I also made your firesong and sunspeaker deck but have had zero plays with real people yet, so there's something to look forward to as well. Thanks for responding and I hope to see some update love for these decks in the future with new sets. /wall of text

I'd drop some of the following lands just for more basics: Dormant Volcano, Evolving Wilds, Terramorphic Expanse, Smoldering Crater. I'll understand if you keep the Urza lands, but I'm not a huge huge fan. You could consider also adding Arch of Orazca, and Maze of Ith.

Just as a start.

god of the bug toes