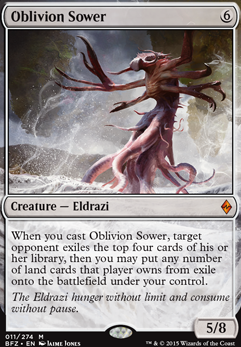 When you cast Oblivion Sower, target opponent exiles the top four cards of his or her library, then you may put any number of land cards that player owns from exile onto the battlefield under your control.

Oblivion Sower occurrence in decks from the last year

A Beast Am I (Shaped By Fire).
by steelangel

spaghetti with red and black sauce
by Unha110w3d

Just added Oblivion Sower as an extra power card with my exile. Im not going to put in Covetous Urge as I already have enough 4 drops and it doesnt fit in with the theme. Thanks for the suggestion!

Wish I could +2 this because I love the Always Sunny reference and because Circu is such a rad general!

I like Oblivion Sower , Oracle of Mul Daya and maybe an Azusa :)

Grixis theft is really fun! I have a similar deck.

griffstick nice Oblivion Sower doesn't care if he was the one that exile the stuff, just that it exiled. Just lands, but better than nothing.