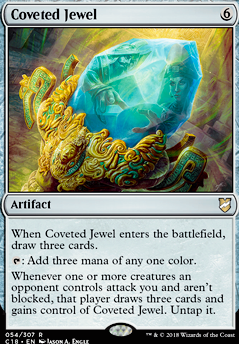 Whenever one or more creatures an opponent controls attacks you and isn't blocked, that player draws three cards and gains control of Coveted Jewel. Untap it.

Coveted Jewel occurrence in decks from the last year

Shaking Up the Table
by HeyItsYoshe 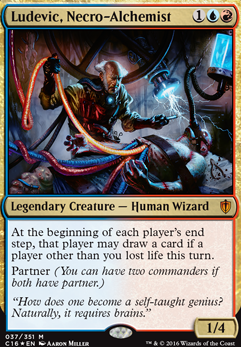 Snakes on a Plane
by Ethanzerker

Some other fun cards may include Toothy, Imaginary Friend and Coveted Jewel, among others. I made a nice Aminatou deck back in the day that's long gone now, though my list would look very different on my second take. She's really fun and unique, and there will always be new cards for her too so keep an eye out.

From the rulings on Coveted Jewel:

I have Caltrops and Death Pits of Rath, so if I attack my creature dies. Do I get my opponents Coveted Jewel? Or at this point, would the declare block step not happen, as my creature is no longer there to be blocked? Unfortunately, I feel it is the second option

Of course! You are very much welcome... Selvala is a longstanding favorite of mine. She's an exemplar of what makes Green one of the strongest colors in Magic.

Regarding the Eldrazi angle. 1. I love it, 2. Could narrow down the number of Drazi's to add more Creature Rocks and perhaps Priest of Titania... Your curve is a bit higher than mine, so it'd be advisable to add more ramp. Also, Phyrexian Dreadnought ! You must get your hands on one. It's costly but necessary, especially with how the high cmc of those Drazis. Another utility to consider would be Coveted Jewel . I'm considering it here... 6 Mana Draw 3 with "Tap for Three" is extremely valuable and even better in a list like yours with numerous beefy Blockers. Be well and Happy Brewing!