Search your library for up to three creature cards and reveal them. Shuffle your library, then put those cards on top of it in any order.

Congregation at Dawn occurrence in decks from the last year

Samut, Voice of Dissent
by HomebrewMTG

The Chu Chu Train
by OlafMerjolf 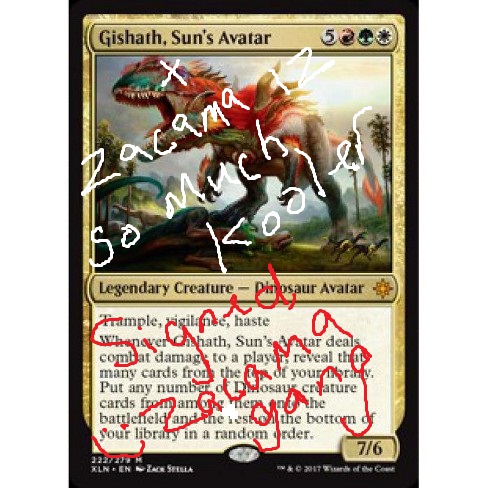 I jest - obviously. Very cool deck. I too am a big fan of the Dinos, but A giant 3 headed tyrannosaurs rex is way cooler than 1 beefy gurl t-rex who brings her friends to the party - if they can manage to show up - in my opinion. Honestly, I think your could utilize a little bit more top deck manipulation to fully take advantage of her ability. Congregation at Dawn and Worldly Tutor are an excellent start, but maybe a Mirri's Guile, Sensei's Divining Top, and/or a Scroll Rack (actually I see you're already considering it - awesome) are worth testing. The previously mentioned can help you dig deep and make more informed decisions on if you should swing with Gishath - or if you have a dino in hand you could have it positioned perfectly for a free play after your commander swings and gets some damage in. Also separately - Sword of Feast and Famine is just really good in an archetype where you want to always have access to big mana. Not required, but i've had alot of success with that card in my Zacama deck The Predator of Predators. Maybe you could take a look and clap back with some dino flavored graffiti/vandalism of your own? :) +1 from me. I hope you get to your 300 upvotes during this weird time of quarantine.

Mortlocke I usually don't play or build competitive EDH decks because i like playing for fun and to annoy people with annoying decks not so much hellbent on winning or getting upset if i do not win. So i tried swapping between overlord and first and it works absolutely fine. As for cascade rulings you are right about the option of casting a cascade trigger (although many opponents get confused and start saying that i have to resolve the spell.... but thats their problem not mine), so i will rethink stuff like Swords to Plowshares, i will add your suggestion of Congregation at Dawn and honestly i definitely need more ramp so i will add some more ramp.

Another rant - if you are going to continue with The First Sliver as your commander - then you can still build around it within the Sliver tribal archetype. All you need are more spells that stack Slivers on top of your library, but those were already suggested in an earlier post. Namely Worldly Tutor and Congregation at Dawn. This is definitely outside of your budget range but Scroll Rack/Mirri's Guile/Sensei's Divining Top would all be beneficial as well as top deck manipulation would (ideally) allow you to stack up your Cascade triggers to be as efficient as possible.

Have you considered Camaraderie or Congregation at Dawn to fill up your hand or set up your draw to get the creatures/combo piece you need? Benefaction of Rhonas might be able to pull both your infinite combo pieces into your hand in one go =). Hope this helps.

I agree with everyone else, so hereâs what I propose. Dolor lower costed creatures that support your bigger ones would work out best. Cards like Vexing Shusher and Destiny Spinner are great support cards. Faeburrow Elder can get you a lot of mana easy. Even just getting 2 is a pretty good payoff. Cards like In Garruk's Wake and Plague Wind are haymakers. Use something like Mystical Tutor, Worldly Tutor, or if you want to just win on the spot then Congregation at Dawn and youâll pull ahead. Donât forget everyoneâs favorite blue cantrip Brainstorm is powerful to topdeck three cards in your hand. Liliana Vess is also great at this. Yes, you donât have as many big creatures. But you will get more of them more often and more consistently.