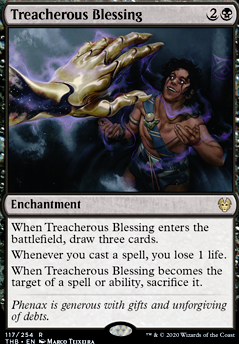 Whenever you cast a spell, you lose 1 life.

When Treacherous Blessing becomes the target of a spell or ability, sacrifice it.

The tale of Ghen the Bard
by toyo_kun

Enchanting, isn't it?
by Hermitofcarim

Attack me I dare you

Nice I rly like it I would put in Dark Ritual just to help get you set up sooner and for some card draw I rly suggest Dread Presence as it is flexible with gaining life or drawing cards. and maybe some things like Sign in Blood which can get you cards but sometime be a rly funny finisher, or Treacherous Blessing as the life lost overtime is not that big of a deal. but overall is an interesting idea that I like because you are able to keep it budget

Oh, i changed a Bit or 2 The last weeks, less Doom Foretold Made me drop the Treacherous Blessing s, so thatâs what itâs like now,...

SaintFinni, this list has been working very well, I did go 3-0 at the first Kaldheim-legal standard tourney and took no game losses.

Hooded Blightfang is decent, but yes QBeast would be better overall as it is much more impactful for just 1 more mana. And I strictly play paper magic, I just don't really care for Arena, not nearly as much fun lol.

Doing that with Eidolon and the aura's will increase the removal package substantially but you will be watering down the core of the deck. Treacherous Blessing made huge impacts for me during the tourney and its just a single card on curve for a typical play-out of this deck, which makes it one of (if not the most) efficient ways to fill our hand back up in BG.

Call of the Death-Dweller over Treacherous Blessing then ditch Snakeskin Veil and add 4 lands. Then you are golden...for best of 1 on Arena at least. No in person Magic in my area yet so it's the only way I get to play.