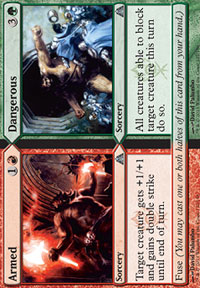 Target creature gets +1/+1 and gains double strike until end of turn.

Of Beasts & Dragons
by Dagron

Gidgetimer on Does Kicker count as part â¦

Thank you for explaining how split cards function CMC-wise. I had totally forgotten about them. Your Armed / Dangerous example doesn't track though. Were you trying to continue with Appeal / Authority and mislinked?

Armed // Dangerous another CMC2 Double Strike, $0.21. Downside is it's Sorcery.

Flameblast Dragon won't get his doubled. Timing is off.

Slagstorm scary because it wipes out the dorks, but I understand the thinking, with Cats/Snakes/Vampires.

Heart Warden, annoying at CMC2, but can draw a card if late in the game if he's a dead draw, $0.20. Modular is sometimes nice, especially in longer games.

Explore might work pretty well with 40 lands, and it draws a card, so maintains your card-advantage and ramp advantage. I also feel you have quite a bit (too many) lands with all the additional ramp/dorks you have? Might try 38 instead.

Thunderfoot Baloth $1.69, but has trample, with Xenagos is 14 Trample, and gives all other creatures Trample. The best of the Trample enablers mentioned for sure.

Deus of Calamity $1.40, only 6/6 trample, but fills your Xenagos, God of Revels devotion, so he really enables a 6/5 Indestructible attacker as well.

Tyrant's Familiar feels better than a Flameblast Dragon ($1.28), because he can potentially blow away a flying blocker, $0.44.

Artisan of Kozilek he is 10/9 (20/19 with Xenagos), Returns a creature from your graveyard to the battlefield (not hand), and has Annihilator 2 (Opponent sacrifices 2 permanents, with haste from Xenagos) for $0.43. I have lots of this guy, I'll bring you one.

Maybe with some shuffling of mana sources you can free up cash for Malignus, but he's quite expensive. Tough for budget.

Khenra Charioteer more trample, hes a 3/3 so he's not shabby for CMC3. Probably don't need that much anyway.

Life's Legacy could re-populate your hand and stabilize your life. Feel like the cards better than the double life on Predator's Rapport.

Explosive Vegetation is good, but $0.92 and CMC4, I'm not sure. Might look for another lower CMC one to ramp a little faster for that $. Go a bit faster.

I haven't seen this one work yet, See the Unwritten and at $0.82, I'd probably just draw another creature like a Artisan of Kozilek. If you get lucky and the stars align, maybe you get 2, but one might be an Elf. I'd rather just draw another key creature, instead of the randomness. If it was CMC5 or CMC4 and casting a CMC8 maybe, but it's CMC6 probably casting a CMC6 or lower (based on probability, I can calculate it when I have some more time)

Living Hive is in Main and Maybeboard.

I only like Momentous Fall (too expensive $), Deus of Calamity (enables Xenagos), Kavu Predator could be interesting in our Pod (vs cats/vamps anyway). Malignus if you can budget him in. Steel Hellkite good utility again CMC0 Snakes/Vampires for example. Thunderfoot Baloth.

I think, less lands -2 perhaps, cheaper ramp (and maybe 1 more), 1 more creature (infect guy preferably), reallocate some cash to make sure each creature is a finisher, like Avatar of Fury is kind of blah, if you can cast for 2 he's ok, but what you doing with the other mana that turn anyway, would rather pay the 6 for a finisher. Siege Dragon feels a little underpowered too, but can board wipe (cats/vamps/snakes), would rather use Steel Hellkite instead, better control, lower CMC.

Inquisitor's Flail not sure equip is right, but it is only equip so maybe? Rancor instead?

Living Hive feels small for CMC8! Wtf, not sure what your doing with the 1/1 insects, that don't even fly.

Hey there! Cool deck you have here! Have you considered Lightning Bolt as a very efficient removal spell, or perhaps Assault Strobe in place of Armed / Dangerous? I also prefer Slip Through Space to Artful Dodge, and I'm a big fan of using Serum Visions to smooth your draws. Also, Mana Leak and Remand are two of the best counterspells in Modern, due to their efficiency. Good luck!

Kind words, thanks SphinxOfChimes1080! I can see Armed / Dangerous being a blowout in the right situation, cool little tech card.

+1, I've always been looking for some good advice on an Uril deck and my search is over. Luckily, this build is very similar to mine. Super fun commander! I like Armed / Dangerous it's won me several games

Uril got a nice budget aura

Boros Charm is great for double strike or protecting all your permanents with indestructible for one turn. Armed / Dangerous is Sorcery, but usually you already have evasion on Uril and he should be unblockable. But adding Dangerous effect on another creature will also clear blockers. I like the general versatility of this spell. But you only have 1 instant in the whole deck (Without Sigarda's Aid Flash). You can get a lot more value if you play something on your opponent's turn or combat. Beast Within can take care of anything for example...

My friend also had a sacrifice deck. It's hard because it's the main weakness of Uril, the Miststalker (+Board wipes). But you could play some spells for that, even if it doesn't fit the theme. Like Secure the Wastes or something. I like Vitality Charm but I haven't seen it anywhere else. It's not incredible, but an instant token can help, and the other modes have some use too.