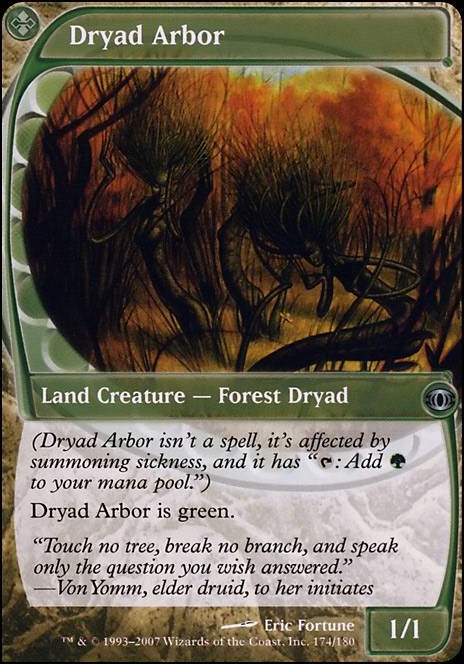 (Dryad Arbor isn't a spell, it's affected by summoning sickness, and it has ": Add to your mana pool.")

Dryad Arbor occurrence in decks from the last year

Howdy there and nice deck! Here are some suggestions you might appreciate! I notice you have the shock lands and the check lands but I think your deck would perform a lot better with some extra stuff. Consider some of thee following!

DeinoStinkus on If imprisoned in the moon ...

Yes, similar to how Dryad Arbor is affected by summoning sickness and Arixmethes, Slumbering Isle cam attack as soon as it loses its land type.

@DeinoStinkus lmao that's great! though i doubt the person on the other side of the table thought so.
thing about trigger happy board states is people will freak out on you.. it doesn't matter how good of a friend they are or how nice they are. they can only sit patiently and watch so many times before they loose there cool.

for me the trick is when i come across board states like that
later on i will recreate the board state and practice
master the triggers, find ways to insert fast loops, and shorten the play as much as possible
you would be surprised how many non-deterministic loops i've been able pull off in a 60 second turn by using this method.

i am only saying this becouse i love the idea of 3 etb's and tutor any creature, i feel your board state could be turned into a win con with Dryad Arbor and a few other choice cards in deck,
and i would love to hear stories in the future on how you were able to stream line this deck and fire it off

p.s. very very important, if you try this once you get it stream line you also have to practice teaching your opponent what your doing step by step. the only way to fast loop a non-deterministic is by your opponent completely understanding what your doing with out being mislead, if at any point in time they become confused or don't understand you have to slow play.

Been on a Tatyova binge myself recently! Thought I would share some synergies that you may be interested in.

Might also wanna consider Nissa's Pilgrimage As your basic land count could probably benefit from another cultivate effect.

Finale of Devastation can just randomly win the game with Rude Awakening or Field of the Dead and can also fetch some pretty decent land synergies.

Meloku the Clouded Mirror can take alot of advantage of all your extra land drops if you ever feel that may be necessary.

Khalni Heart Expedition is just really easy to set off with all the extra land drops you can accumulate.

If you budget allows, just running snow basics so you can include Into the North is worth! Plus you can also run Mouth of Ronom

So i added Hooded Blightfang, I also wanna test it out as it's seems as an agressive 3 drop! Liliana's Standard Bearer also, if i can get 3 card for 3 mana i'm fine with that! For Bastion of Remembrance, I do run Demonic Tutor, Diabolic Intent and Beseech the Queen to get it. It's a non-creature so sometimes harder to remove on the spot when you're combo-ing out and it gives a 1/1 creature if you're missing 1 token to get a loop going!

My deck is more of a pod deck I guess, it's missing some expensive pieces as of now. I love your take on Hapatra, it looks pretty competitive and all good cards, your exclusions are accurate too!

Maybe Dryad Arbor with that Green Sun's Zenith you have ! Some cards I would cut but depends on your meta too like Null Rod but I understand why you play it! How's Fiend Artisan ? I feel like it could be a good add even tough i run Birthing Pod!

Yeah the Dark Depths is pretty fun but you do put yourself 2 lands down and become a big target. I keep forgetting how much the price on Cabal Coffers has spiraled. Most people are pretty cool with proxies as long as you own a real version and if it's a nice proxy and not a sticky note with the name scribbled on it, especially if it's to keep up with the power level of the table. On the other side if your deck is spiking above everyone else in power then people probably aren't going to be as ok with it. I like Seasons Past a lot. I've never seen it cast without it being incredible. Depending on what you're getting have you seen The Mending of Dominaria?

Also one more land that would be kinda funny would be Dryad Arbor, just for the Green Sun's Zenith on turn 1 since it's cmc is 0

You can run Urborg, Tomb of Yawgmoth in any EDH deck.

There are three things that affect color identity, color (duh), any mana symbols on the card, and color characteristic-defining abilities (CDA). Urborg doesn't have a color CDA. There is only one land (Dryad Arbor) that has a color. Urborg, also, doesn't have any mana symbols. It simply states that all lands are Swamps. While this ability gives Urbord the ": Add " ability on the battlefield, it is not printed on the card. Thus, Urbord has a colorless color identity.