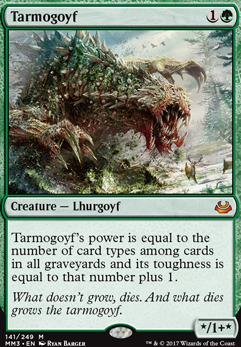 Tarmogoyf's power is equal to the number of card types among cards in all graveyards and its toughness is equal to that number plus 1. (The card types are artifact, creature, enchantment, instant, land, phenomenon, plane, planeswalker, scheme, sorcery, tribal, and vanguard.)

Bug Out Pile
by Deputy_Cofax 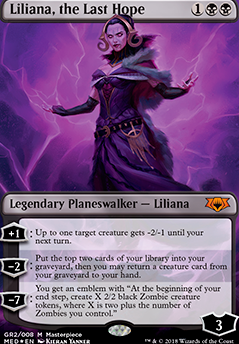 Omnath, Locus of OP
by karnokrat 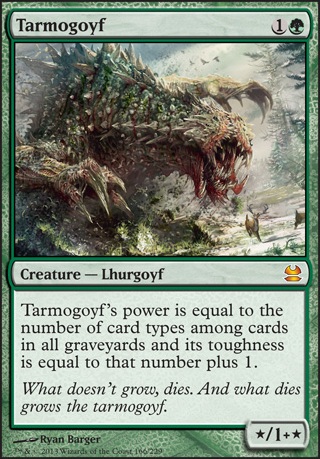 It's a Mad World (U/G Madness)

If Aquamoeba hadn't been affected by the change in which combat no longer uses the stack, I'd probably have it here as a two of. Having all green creatures can really screw you if someone has pro green.

I can imagine why it was your deck back in the day. This deck is really fun. Not the most competitive anymore (thanks a lot Tarmogoyf!) but still very fun to pilot. Thanks for the +1.

this looks kinda slow for modern and a lot of your cards have high cmc. a mana cost of 5 for a card that doesn't provide immediate impact on board state is considered really expensive in modern.

you're missing a lot of the best mill cards, and Liliana's Caress and Waste Not seem like odd choices since you have almost no discard effects.

Undead Alchemist is gonna be useless as your only zombie. you also need dual lands like fetches, shocks, and checklands.

finally, keep in mind that modern is a brutal format that is by no means unfamiliar with graveyard synergy, making mill not a great strategy for modern. you'll be helping out dredge decks, fueling Snapcaster Mages, and pumping up Tarmogoyfs. modern is a format where Emrakul, the Aeons Torn can come at you on turn 3 with haste.

abby315 on Building a deck around Wayward â¦

Hm. I don't think a 2/2 is a fast enough clock to be denying your own resources. Just think about running into a Tarmogoyf or a Death's Shadow on turn 2.

Honestly, I think the Guide Beast has a home as a 2-3 in a Zoo deck, with Steppe Lynx, as a "late-game" play that allows you to pick up a land and keep the damage coming. But that would be a Tier-Two deck, as it's much slower than Red Prowess.

Tarmogoyf and Liliana, the Last Hope feel really out of place in this deck. Yes they are really strong midrange threats, but they're the only midrange threats in the deck. I'd try to either remove those pieces and go more controlling, or remove some of the more controlling pieces (a few of your removal spells maybe) and add in some more effective early game threats like goyf so that you can provide pressure in the early game. Right now I feel like your in a weird middleground between midrange and control, with not enough threats to close out games against control and midrange decks, and not enough control pieces to stabilize against faster decks, so I feel you need to pick one of those routes to go down.

A large reason Fact or Fiction isn't played is because Cryptic Command usually takes up the four mana slot in decks that would want Fact or Fiction. As great and iconic as it is, FoF just isn't what a lot of control decks want.

I believe FoF can still be playable though in decks that play blue that are not focused on control. You can sort of min/max the value of the card by playing it in decks that use the graveyard to some extent. I wondering if like a simic midrange deck that runs cards like Uro, Titan of Nature's Wrath, Tarmogoyf, and Fact or Fiction could be something worth considering.

I made a pretty sweet modern deck that uses FoF in the mainboard: Knightfall - EOTFOFYL

ghostmode on Terror of the peaks question

Sorry, forgot to Tarmogoyf and Fiend Artisan but I can't edit my comments lol.

Tylord2894 on Terror of the peaks question

abby315, your answer is, overall, correct, but there is a mistake that TriusMalarky also made. The determining of P/T is not part of state-based actions. A characteristic-defining ability (CDA), like that of Tarmogoyf, is always defined. There is no point in time where it is calculated as it is always defined. Secondly, P/T (de)buffs are applied in a sort of similar fashion. The traits of an object in the game are constantly being determined.

abby315 on Terror of the peaks question

Massacar has it, except that Artisan doesn't get counters, just a state-based pump.

Anything that has a state-based P/T, e.g. Artisan, Tarmogoyf, will enter with a P/T according to the battlefield. So, if someone exiled your GY in response to the Goyf or Artisan cast, they'd do 0 and 1 damage with Terror respectively.

Also, any creatures that enter "with" counters, e.g. kicked Academy Drake, will deal damage equal to their power including the counters.

If a creature gets +1/+1 counters "when" it enters the battlefield, e.g. Basri's Lieutenant, you can stack the triggers so that the +1/+1 counter resolves first, and then Terror's ability resolves and deals, in this example, 4 damage (if you put the counter on Lieutenant).

Last trick, the trigger goes on the stack and can be responded to. So, if your creature enters the battlefield and your opponent kills it while Terror's ability is resolving, it deals damage equal to the creature's power as it leaves the battlefield. In this example, you would get 3 damage from Lieutenant if your opponent responds to the ETB counter trigger; you'd get 4 damage if they respond to the Terror trigger.