Mono U Artifacts | Gladiator
by iamthabyrdman

The Thopter Swarm
by Milesfuzz 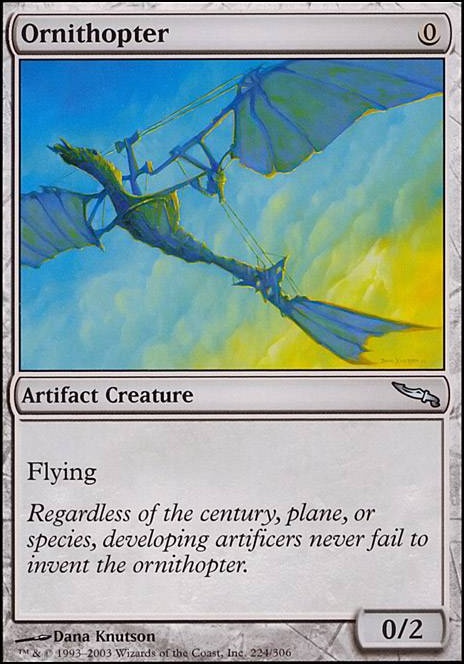 Jhoira UR Artifacts
by rohdejos

I was the same, my friends play very casual decks and Iâm definitely outlined as the combo player anyway. I was given an Urza for my birthday. I said I was thinking about just putting him in a deck and my friends said, âno you need to build an Urza deck with Urzaâ, so I did, with infinite mana combos and all, and told them what it was like and they were fine with it, they just target me a bit more when I use it because they know it can win out of nowhere.

I would suggest just talking to them about it. My friends are happy to play against mine, because itâs fun for me, and then after we play a different game and I wonât use it.

Masterful Replication could possibly work but you would have to change a a lot about the deck first. The initial combo only takes three turn to take off so if you are making it to having six available Mana, that happens to include a blue, to dump into one spell means your in a really bad spot. But where there's a will there's a way with the right alterations you could make masterful Replication more useful.

I think that Masterful Replication would be really good in this deck because you could turn all of your artifact creatures into Steel Overseer s then put a bajillion counters on all of your creatures, or you could help out your board w/ a bunch of 3/3s. Maybe cut your Mishra's for some. There are much better options for counterspells instead of Thought Collapse . I would probably use Sinister Sabotage instead.