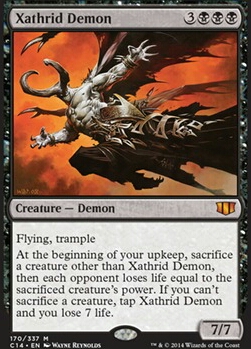 Kaalia but hold the dragons
by FumeWolf

If you want to sacrifice for value, I highly recommend Mazirek, Kraul Death Priest . Since he provides neither sacrifice nor recursion by himself, I think heâs often underestimated. Provide the sacrifice ( Butcher of Malakir , Xathrid Demon , Sidisi, Undead Vizier ), the reanimation ( Hell's Caretaker , Journey to Eternity  Flip, Sheoldred, Whispering One ), and tokens to buff ( Mycoloth , Korozda Guildmage , Pentavus ), and he can do some work. Better than Meren, Muldrotha, or Karador? Probably not, but possibly more interesting.

Lord of the Pit is an iconic card, and has inspired several similar cards, such as Liege of the Pit and Xathrid Demon, but I thought that it would be interesting if there was an aura that turned a creature into a lord of the pit, so here is what I devised.

I made the mana cost of this card mirror that of Celestial Mantle, as this card is very heavily black in the way that that card is heavily white. As with the cards that inspired it, it requires careful strategy to properly use, but, as an aura, it could, theoretically, be put on an opponent's creature to hurt them.

What does everyone else think of this card?

Also, I would like to thank whoever devised the custom card tag, except that, when I attempted to use it, it did not work, so I still needed to type out everything manually.

Wow, I'm amazed by all the input so quickly. Certainly some food for thought here. Huge thanks to everyone. I did realize that Demon of Death's Gate would not work with the original concept since it lists specifically sac'ing black creatures and eldrazi are either colorless or devoid. Granted, there's better demons that might support this concept like maybe Xathrid Demon, Reaper from the Abyss, Kothophed, Soul Hoarder and/or Harvester of Souls. Though focusing on eldrazi with emerge in conjunction with scion producers and cards like Grave Pact, Quest for the Gravelord, and Skirsdag High Priest might be better. Suppose more like running demon support rather than demon themselves. The deck would be mostly casual and aim for just a fun, interesting way to use the 2 archetypes regardless.

i run a meren deck and i love it got a few idea's for ya i'll start with creatures Blood Artist why not get some hit points in when you sac or die along with Bontu the Glorified, Mazirek, Kraul Death Priest, Mycloth, Necroplasm helps controll, Nyx Weaver helps feed your grave yard which is your tool box, Rune-Scarred Demon, Tarmogoyf, Xathrid Demon, Brawn, Mortivore, Lord of Extinction, Grisly Salvage is good for feeding your graveyard, Putrefy, Dictate of Erebos, Deathreap Ritual, Small Pox, Pox,Westvale Abbey  Flip and i really think that these last 2 are key Mesmeric Orb, Smokestack. just some thoughts my meren functions really well and is around where your looking to be in your meta give it a look over Gravedigger