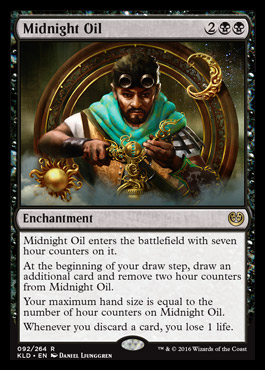 Midnight Oil enters the battlefield with seven hour counters on it.

At the beginning of your draw step, draw an additional card and remove two hour counters from Midnight Oil.

Your maximum hand size is equal to the number of hour counters on Midnight Oil.

Whenever you discard a card, you lose 1 life. 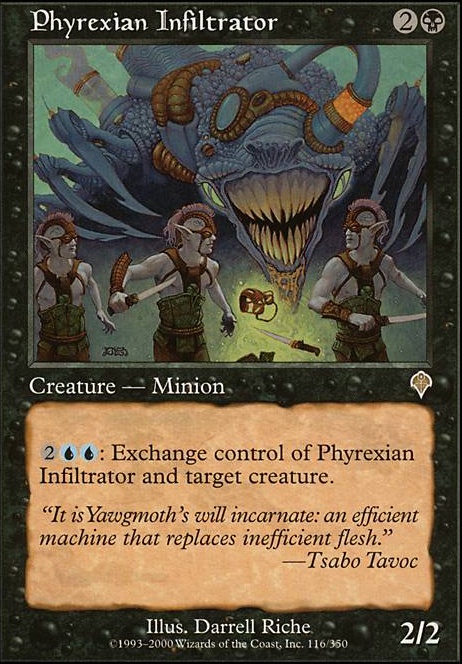 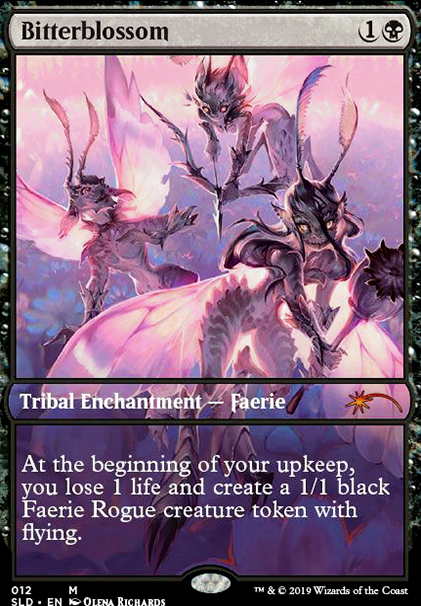 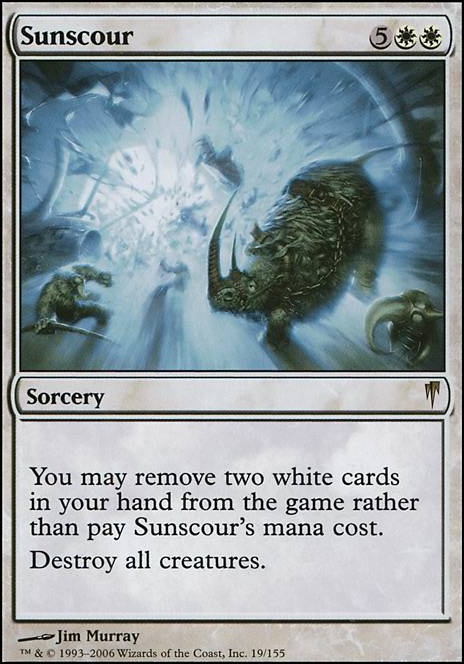 zephyr_chang Part of me reads Midnight Oil and is deeply unimpressed, but what I thought of was that if you play it in the right deck, it's a slower Phyrexian Arena without the drawback. This requires you to have a low cmc average while also not running too many lands. You need an empty hand every turn somehow, and to have not had to discard to get it there.

The part of me that hates it sees it as slow, janky, and very able to backfire. This is why I run only 2, I almost never want to have more than 1 out, and don't expect anyone to bother removing it. To be frank, what am I missing? Is 4 mana so slow it's just not worth bothering with, ever?

I would definitely run Ashiok, Dream Render as it is amazing in your game plan. Other than that, maybe a Ghostly Prison type effect to slow the game down or Force of Negation as you have a lot of blue spells and sometimes countering one more thing can be vital. Maybe Midnight Oil or Steel Golem as some more donate cards. I love the overall look pf the deck, just needs a bit of fine-tuning.

One with the land

How bout the combination of Midnight Oil and Damia, Sage of Stone You maximum hand size will be reduced to 1 but youâll be refilling your hand every turn and it wonât matter if you have to discard down to 1 because you can play them from the yard.

So over time since the release of Fractured Identity I keep thinking of reasons that this card might be underrated. Definatly under used. And it's simply broken lol. Let me explain. I've thought of a few cards that go great with it. Cards that create a great situation for you or just out right win. So heres what I got so far, here we go.

So far thats what I got. With enough ideas i can make a deck out of this idea. Obviously phage the Untouchable is the best one. My question to you guys is, what did I miss?

Got some games in with this tonight and Tragic Poet did some work with Cast Out that was interesting. Had double Poets down and was able to cycle, activate Faith, draw, sacrifice, return Cast Out, cycle, activate Faith, draw, sacrifice, return Cast Out, cycle, activate Faith, and then discard to hand size thanks to Midnight Oil and activate Faith a few more times all with just six mana to drain out a win (started with just land and Cast Out in hand and converted it into three new cards and then discard down to zero because of Oil with 0 counters on it at the end step for a total of 6 Faith activations to drain 12 life). Kambal, Consul of Allocation was an All-star as well buying all the time in the world to get set up. The abundance of Isolation effects to control the other side of the board worked exactly as planned, and Kambal did his thing to make digging, countering, and setting up combos very costly for the opposing life total. I love this :)