You can't win the game and your opponents can't lose the game.

Abyssal Persecutor occurrence in decks from the last year

How The Devil Plays MTG: The Mono-Black Primer
by Sargeras 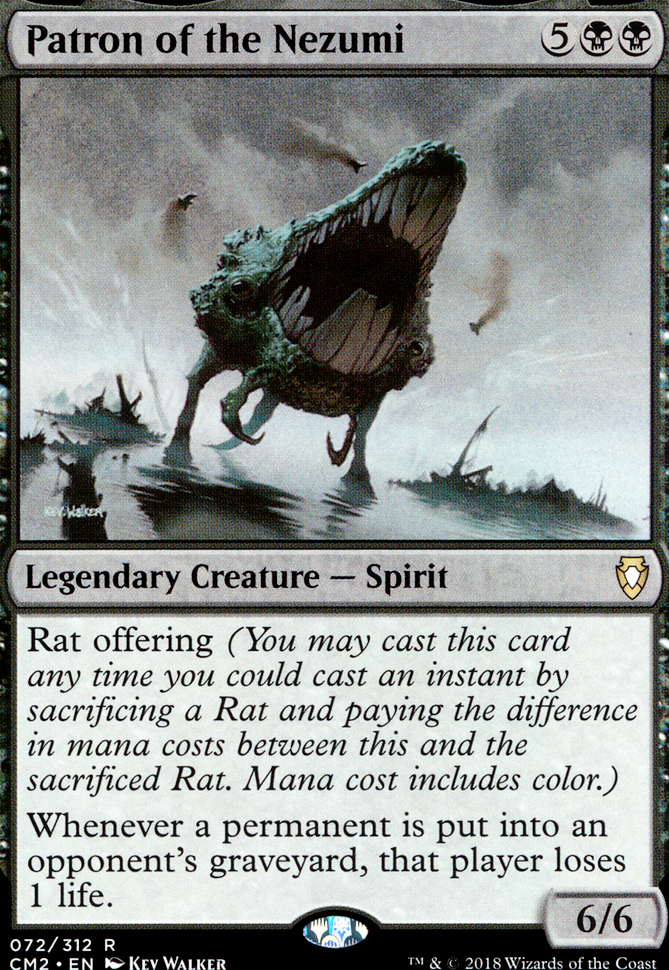 You can format your commander in your mainboard like so:

Unless its your center theme, I wouldn't recommend Will of the Council as its not group-hug at all and its payoffs are either meh or extra turns (feels bad man).

I highly recommend Karona, False God. It can swing for 8 by itself and politicking its swings or protecting yourself from your own commander is a lot of fun. Scheming Symmetry, Wishclaw Talisman, Havoc Festival, and Captive Audience are also a lot of fun.

Atris, Art Of The Deal

Love the idea of the deck, and can always respect a level of restraint when it comes to crafting 'ideal' setups in favour of the theme. I run a similar sort of idea (though wildly different in approach) in You cannot change your fate..., which aims to balance the board state by helping players that aren't doing so well while hindering ones that are doing well, with the end goal (can't exactly call it a win con since it doesn't let me win) being Divine Intervention. Obviously with that being B/W not everything will transition but I feel there's some ideas I think may work, though obviously you'll know best.

Firstly I've always enjoyed Forbidden Orchard. While you don't usually need much colour fixing in a 2-colour setup, it still helps if you can get it, and giving someone who isn't doing so well at least a chump blocker is just a nice thing to do (I don't know if you'd be able to work this into any deals with anyone, but again, you probably know best whether it's worth considering).

I don't know if you have enough means to get rid of it when you need to, but if you do, I feel Abyssal Persecutor could work wonders. There's no better deal you could make with someone who's about to lose than to keep them alive by your good graces. You'd need a way to ditch it if things go south, but if you have that, I think it could lead to some interesting situations.

Lastly, a card that I am not yet running in my deck but I have every intention of trying out, and I think would work even better for you is Head Games. While it'd be good in my deck for balancing out the game, I think the ability to give someone a hand with any combination of cards from their deck would be an insane amount of leverage in any deal you'd be looking to make. Otherwise you could always use it to give someone a hand full of lands if they don't hold up their end of a deal with you.

Ultra-budget: Are You Afraid of the Dark?

Don't add Heartless Summoning ; you're not playing with crazy expensive demons. I approve of Demon of Catastrophes as a secondary way to kill your own Abyssal Persecutor .

I vote Defile instead of Tragic Slip . Fungal Infection might be worth considering, because it can still stop a few critters in modern.

If you go with more sacrificing Sengir Autocrat and Rite of Belzenlok create lots of tokens that can be sacrificed, but are too mana-intensive for their effect. Maybe Doomed Dissenter , Lazotep Reaver or Orzhov Enforcer ? Bitterblossom is too far out of budget range, but for a consistent stream of sacrificable creatures Dreadhorde Invasion but be worth it.

Why play Abyssal Persecutor if you have only two cards to get rid of him?