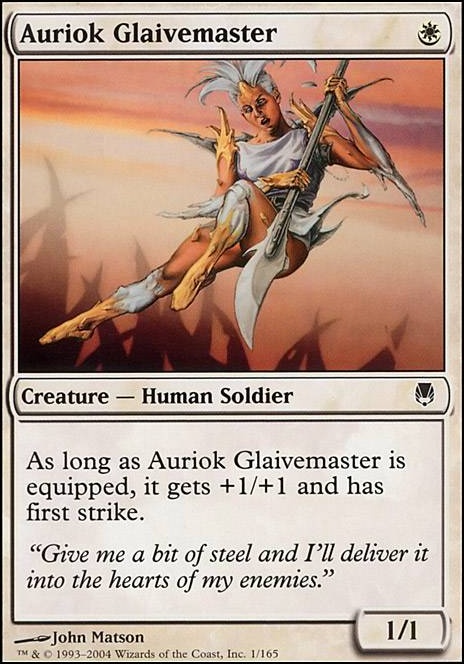 As long as Auriok Glaivemaster is equipped, it gets +1/+1 and has first strike.

Equipped for Greatness...Kind of (WIP)

You might want to lower the number of CMC 3 creatures in favor of more aggressive options. Auriok Glaivemaster and Kitesail Apprentice would suit your deck really well.

Check out $5 Kor Equipment for some other ideas.

I think other than Leonin Shikari (combat tricks with Equipment), Mirran Crusader (built in protection and evasion), and Puresteel Paladin (card advantage), you shouldn't be playing creatures that get a bonus only from equipping something (Auriok Glaivemaster, Auriok Steelshaper, Kor Duelist). My rationale is that they are going to be quite weak when played early, and that's not ideal. You need some resilient creatures in the first few turns, not creatures that become better on turn 4 when you equip something on them. Even if you cast them early, they are likely not attacking nor blocking anyway given they are basically vanilla 1/1s.

Therefore, some suggestions are Doomed Traveler (gives you an evasive spirit after dying), Sacred Cat (two lifelink bodies for a 1-drop), or Knight of the Holy Nimbus (tricky to get rid of), or Squadron Hawk (gives you more evasive bodies to hold the swords), or Auriok Champion (protection from more than one colour, goes well with the swords too). These guys will probably be better early-mid game.

I would also cut Quest for the Holy Relic entirely - it is a terrible top deck, objectively quite slow even if you manage to play it on turn 1, especially since your deck doesn't run that many creatures in the first place. And since that is the case, you may as well cut Argentum Armor, and play another sword or something like a Batterskull instead? Also, you can double up on Swords - Sword of Fire and Ice and Sword of Light and Shadow are objectively the best two swords and you can play two of each if you want.

I'd also suggest playing Gideon, Ally of Zendikar over Elspeth, Knight-Errant. He is more popular in midrange white decks ever since he was printed. I think his abilities are more relevant here. He can even animate himself and equip something if it comes to that.

Generally, I think 21 Lands, 4 Sorcery, 4 Instant, 2 Planeswalker, 6-7 Equipment, 22-23 creatures will work. Having only 19 creatures is quite risky, especially if you play against removal heavy decks like control (removal into Snapcaster buyback and/or boardwipes), Jund/Junk, etc.

What I would cut: Critters- Auriok Glaivemaster, Gideon's Lawkeeper, Kitesail Apprentice, Knight of Meadowgrain, Knight of the Holy Nimbus, Knight of the White Orchid, Kor Duelist. The thing with soldiers is they build on each other...and these do not. They are too low-impact...even with equip help.

Non-Critters- Chariot of Victory, Fleetfeather Sandals, Ring of Thune, Crusade, Glorious Anthem, Mobilization, Timely Reinforcements, Murder Investigation, Militia's Pride. To me, the anthems at +1/+1 are weak, especially if they affect both sides of the table...but that may be just me. Mobilizatioin/Militia's pride seem slow/clunky, and the equips I removed...I feel like giving those to just one thing wasn't going to cut it with the army you're building.

How do you feel about A LOT of math/dice at your table? Cathars' Crusade is powerful in a token deck, but I often find it's not worth the headache. It's ultimately up to you, though.

Consider:Angel of Renewal, Conclave Phalanx, Congregate, Kalemne's Captain, Victory's Herald, Eldrazi Monument, Sun Titan, Dictate of Heliod, Nykthos, Shrine to Nyx, and any Elspeths/Ajanis you can get ahold of :)Of course, no one says you need to get all these cards right away if you're struggling with adds/cuts. Play the deck, and figure out what you like/dislike from there. Think of the suggestions as upgrades to try once you find something you dislike.